Shaquem Griffin has the bloodlines and willpower to play in the NFL. Why aren’t teams knocking down the door trying to draft this guy?

With his combination of speed, power, scheme diversity and motor, it appears he has all the intangibles NFL teams are looking for, except for one— a left hand.

He and his identical twin brother, Shaquill Griffin, played football at the University of Central Florida together.

When the twins’ mother, Tangie Griffin, was pregnant, Shaquem was affected by a rare, prenatal condition known as Amniotic Band Syndrome. According to the National Organization for Rare Disorders, this condition causes fibrous amniotic bands in the womb to wrap around a limb and restrict development. Shaquem had an amniotic band wrapped around his left wrist, which severely restricted the growth of his hand and fingers.

Growing up, Shaquem would always play with his brother, trying to do everything he did. However, if Shaquem ever hit any of his fingers it would cause extreme pain. Anytime he rolled over in his sleep, or bumped his arm against something, he would wake up screaming from the pain.

One night, Tangie heard a scream she knew all too well. She ran to the twins’ room to comfort 4-year-old Shaquem, and rock him back to sleep, as she did countless times. To Tangie’s surprise, he wasn’t there.

She found Shaquem in the kitchen, with a knife in his hand. When she asked what he was doing, he looked her in the eyes and said, “I want to cut them off.”

Tangie Griffin convinced her son to put the knife down and rocked him to sleep.

The very next day, Shaquem had his left hand removed so he wouldn’t feel that pain anymore. His family had no doubts it was the right decision.

Once his hand was removed, things in the Griffin household began running smoother. Shaquem was in a significantly less amount of pain than he was before the surgery, and the twins began playing sports as soon as they could. The brothers found solace in their ability to compete in different ways.

With a family so willing to help find ways for Shaquem to experience everything like his brother Shaquill, Shaquem blossomed into a talented athlete. However, there were still coaches along the way that told him he had no business playing football and should focus his efforts on something else. 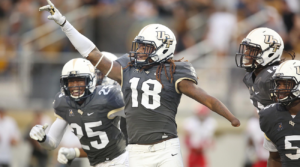 Griffin will have his chance to show what he’s capable of at the 2018 NFL Combine taking place Feb. 27 – March 5 in Indianapolis.
Photo courtesy of Orlando Sentinel

Shaquem ignored that criticism and adopted an “I’ll-show-you” mindset, pushing him to an excellent high school career. He was ranked as a three-star talent on ESPN’s recruiting service.

In February 2014, both twins signed to play for the University of Central Florida.

Shaquem’s first two years at UCF were tougher than he expected, as he only received playing time on three separate occasions. Distraught about his lack of play, he started to doubt whether playing football was what he needed to be doing with his life. However, after a couple of long talks with his brother, he decided to buy into the program fully.

Shaquem let go of the things he couldn’t control and worked harder than he ever had before.

This worked wonders for him, and he was rewarded with a full-time starting role on the field, just a couple feet from his brother. Shaquem took full advantage of his two years in a starting role, generating plenty of buzz for a future in the NFL.

Shaquill was drafted in the third round of the NFL draft last year and signed a four-year $3.25 million contract with the Seattle Seahawks. Shaquill, who is older than Shaquem by 60 seconds, was a standout cornerback in his time with the Golden Knights. Shaquem spent the past two seasons terrorizing offenses as a hybrid edge rusher/outside linebacker for Central Florida.

While Shaquem likely isn’t going to be drafted as high as his brother was a year ago, he still has a list of impressive awards under his belt.

Shaquem was the American Athletic Conference’s 2016 Defensive Player of the Year, is two-time First Team All-AAC and most impressively, the Peach Bowl’s Defensive MVP against a heavily favored Auburn football team.

NFL.com currently lists Shaquem as a seventh-round draft pick for this April’s upcoming draft, but there is still plenty of time between now and then to boost his status. He was invited to the NFL Combine in Indianapolis, which is a big move for him. He’ll have a chance to show off his impressive athletic ability and try leaving a lasting impression.

While Shaquem understands people are naturally going to talk about his hand, he’s trying to end the stigma around his disability and just be just seen as the athlete that he is.