I did, however, get the chance to audition here at Tarleton State University. RHA (The Residence Hall Association) teamed up with P.A.N.K.U.S (People Against Not Knowing University Spirit) to host a talent show at the ballroom in The Thompson Student Center. 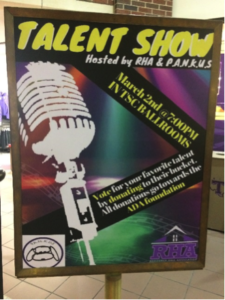 Flyer for the Talent Show
Photo by Ashley Inge

I really liked the atmosphere of the auditions. Anyone who wanted to audition, could, and there also wasn’t any pressure to audition if you didn’t want to. In addition to that, everyone was very encouraging and supportive of each other.

We were told that if we were going to be in the talent show, we would get a call the following Monday and the talent show would take place that next Thursday in the Ballrooms in the Barry B. Thompson Student Center.

As was promised, I got a call the following Monday and was told that I was chosen to be a participant in the talent show.

There were 12 acts that performed in the talent show. We all did a soundcheck an hour before the show to make sure everything was running smoothly with our performances.

The talent show was a huge success. Altogether, the acts raised over $200. The proceeds from the talent show went towards the American Diabetes Association (ADA) foundation for diabetes research.

I had a blast performing in the talent show. This event gave me the opportunity to meet a lot of different people here at Tarleton. It was such a positive experience with good vibes throughout the show. It wasn’t a huge competition. Everyone was there to have fun. I also loved how the proceeds were donated to the ADA foundation. Overall, I loved getting the opportunity to do a talent show at my own university.

And, I would gladly choose Tarleton’s Talent Show over America’s Got Talent any day.