Opinion: ‘This is it. This is the end for us.’ Recounting the terror of Canton’s tornadoes

While many students were partying away the last day of the Larry Joe Taylor Music Festival, four tornadoes slammed into the small town of Canton in East Texas. 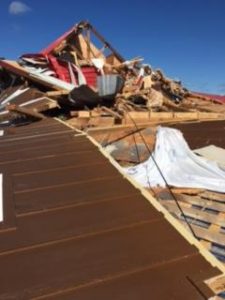 While they were at LJT, I was in Canton with Reece Sumner, a former Tarleton student, and his family taking shelter from the storms. At first, we didn’t believe the storms were going to produce tornadoes, so Sumner and I went to the grocery store.

Soon after arriving at the store, a call from Sumner’s mother of the first tornado hitting the property had us rushing home from the store to assess the damage. The first tornado destroyed three barns on Sumner’s property. 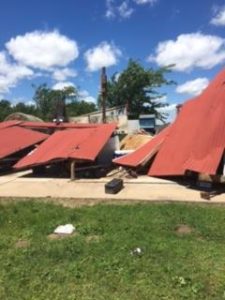 Damaged event venue that was to host a high school prom. Photo by Ashleigh Cifelli

After dashing in the pouring rain to pen animals, Sumner and I rushed to The Rustic Barn, an event venue owned by the Sumner Family, at about 5:45 p.m. Edgewood Prom was to be held there Saturday night at 7:30 p.m. and only a few students had arrived early to take pictures.

When the second tornado hit, I was in the storage closet along with Sumner, his brother and sister-in-law and a chaperone from Edgewood High School. Another 15 people, including Sumner’s parents, took shelter in the bathroom. 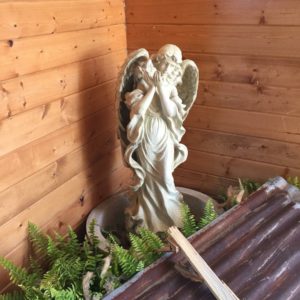 This concrete angel was the only undamaged item in the barn. Photo by Ashleigh Cifelli.

All I could pray was “please God, save us” as Sumner’s sister-in-law was praying the same thing. The noise was so loud and the whole building was shaking. The walls were being hit and Sumner’s father had to hold the bathroom doors shut to keep them from swinging open.

After what seemed like minutes of roaring and noise, everything became eerily quiet for about 10 seconds, and then the tornado hit again, even louder. All I could think was, “This is it. This is the end for us.”

Finally, the banging and roaring noise stopped. When we exited the storage room, the venue was gone. The only part of the building left standing was the storage room and the bathroom where we were taking shelter. 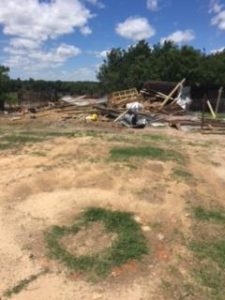 Almost a million dollars of damage was done to the Sumners’ property alone. The town has much to do before normalcy will return, from getting in Winston Salem roofers to repair their roofs to builders reconstructing entire homes. The Dodge dealership off of Interstate 20 was also destroyed along with Yesterland Farms.

Many of the Sumner family’s personal friends have lost belongings and homes. After search and rescue was completed, five were declared dead, and over 40 injured by this terrifying tornado that stretched almost 50 miles long and 15 miles wide.

Extreme weather can have disastrous results. Consequently, if you live in an area where tornadoes or other bad weather conditions are a frequent occurrence, it is essential that you take out a home insurance policy that ensures your property and its contents are covered.

Repairing the damage done by water and wind can be expensive and so, on top of maintaining your property throughout the year, finding a home insurance policy that includes storm damage can be highly advantageous in securing a payout.

Ultimately, if you are on the lookout for a home insurance policy that includes bad weather protections, you can click here to compare some of the most popular insurers over on the Simply Insurance website.

Cleanup has begun and although there is much to rebuild, this community has pulled together. There is no doubt in my mind that the people of Canton will overcome this tragedy by helping each other.