ORLANDO, Fla. (AP) — While his victims texted heartbreaking last words to loved ones from the blood-drenched bathrooms, Omar Mateen apparently went on Facebook to measure the shockwaves his attack on a gay nightclub was generating.

He searched for the terms “Pulse Orlando” and “Shooting,” according to a letter released by a Senate committee.

The letter detailing Mateen’s Facebook posts and searches in the final hours of his life came to light as grief-stricken Orlando prepared to bury the first of the 49 dead and awaited a visit Thursday from President Barack Obama, who planned to meet with victims’ families and first responders and offer words of solace.

Investigators, meanwhile, are trying to reconstruct Mateen’s movements before the rampage at the Pulse dance club and are taking a close look at his 30-year-old Palestinian-American wife, Noor Salman, and what she may have known about the attack.

“The real muslims will never accept the filthy ways of the west,” Mateen, a 29-year-old American-born Muslim, wrote on one of at least five Facebook accounts believed to be associated with him, according to the letter from Republican Sen. Ron Johnson of Wisconsin, chairman of the Senate Homeland Security Committee. 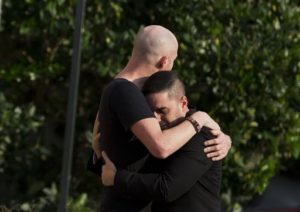 The committee sent the letter to Facebook CEO Mark Zuckerberg, asking for help uncovering the trail of hate Mateen left behind in cyberspace. Johnson did not explain how the committee obtained the information about Mateen’s Facebook activity.

According to the letter, Mateen made his series of Facebook posts and searches before and during the attack. The letter did not specify what took place when. But a person familiar with the situation who was not authorized to speak publicly said the Facebook posts came moments before the attack began.

“America and Russia stop bombing the Islamic state,” Mateen wrote, according to the letter.

As he did in his call to a 911 operator during the massacre, Mateen pledged his allegiance on Facebook to the leader of the Islamic State group and, in his final post, warned: “in the next few days you will see attacks from the Islamic state in the usa.”

However, CIA Director John Brennan said Thursday that the agency has found no connection between the gunman and any foreign terrorist organization.

“As we have seen in Orlando, San Bernardino and elsewhere, ISIL is attempting to inspire attacks by sympathizers who have no direct links to the group,” Brennan told the Senate Intelligence Committee.

“Last month, for example, a senior ISIL figure publicly urged the group’s followers to conduct attacks in their home countries if they were unable to travel to Syria and Iraq.”

The three-hour rampage began at 2 a.m. and ended three hours later with Mateen being killed by a police SWAT team. The FBI said it is still gathering evidence at Pulse and analyzing cellphone location data to piece together Mateen’s activities leading up to the massacre.

On Saturday night, hours before the rampage, Mateen visited Disney Springs, an outdoor restaurant, retail and entertainment complex at Walt Disney World, an official who was briefed on the case but insisted on anonymity to discuss the continuing investigation told The Associated Press.

The official said it is not clear what Mateen was up to.

Mateen’s wife has gone into seclusion. U.S. Attorney Lee Bentley repeatedly refused on Wednesday to say whether charges might be brought against her or anyone else.

Six of the wounded remained in critical condition, and three others were listed in guarded condition.

This story has been corrected to show that the last name of Facebook’s CEO is Zuckerberg, not Zuckerburg.