A curfew already in place Saturday prevented residents from leaving until it was lifted Wednesday morning. The offensive has so far consisted of airstrikes, but the lifting of the curfew to allow residents to flee could signal a wider ground offensive to come.

Arshad Khan, the head of the region’s disaster management authority, said 79,000 people left North Waziristan Wednesday and Thursday. Even before the operation was announced about 63,000 people had left because of previous airstrikes and fears of a larger offensive.

Residents have been streaming out of the region in trucks, cars and tractors loaded down with possessions such as mattresses, fans and television sets. Some have even brought their livestock. 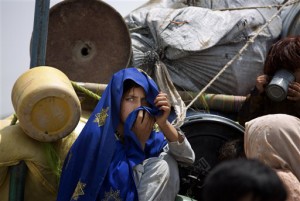 A Pakistani tribal girl sits next to her belongings on a truck after arriving to Bannu, Pakistan, Wednesday, June 18, 2014. Thousands of villagers fled as Pakistani army relax a curfew in troubled North Waziristan. Pakistani jets pounded targets in the country’s northwest in major offensives designed to root out safe havens in the volatile region.
(AP Photo/B.K. Bangash)

Almost all have opted to stay with family or in rented houses instead of at a camp established for them.

Pakistan has long been criticized for failing to target militants in the North Waziristan region. The U.S. says that militants such as the Haqqani network use the region as a base from which to attack Afghan and NATO troops in neighboring Afghanistan.