The lecture, “An Evening with Richard Leakey: Exploring a Life of Discovery,” is part of the university’s Speaker Symposium Lecture Series. 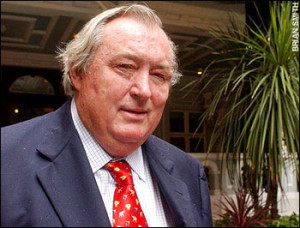 Richard Leakey has spent more than 40 years fighting for wildlife conservation and political justice in Kenya.
Photo courtesy of the Gorilla Foundation

The event will take place at 7:30 p.m. in the Clyde Wells Fine Arts Auditorium. Admission is free and all members of the public are invited to attend.

In preparation for the lecture, Dr. Marcy Tanter, associate professor of English, said those planning to attend may enjoy watching a National Geographic documentary on Leakey.

Being the son of famous fossil hunters Louis B. Leakey and Mary Leakey, Richard Leakey’s family has been credited with many significant fossil discoveries in history. In 1968, at the age of 24, Leakey was appointed the director of the National Museum of Kenya, where he coordinated many excavation expeditions near Lake Rudolf, which is now known as Lake Turkana. These expeditions produced large amounts of fossils, including many hominids.

Leakey lost both of his legs below the knee in 1993 in an airplane crash caused by a malfunction. However, the accident did not stop him from making a difference in Kenya.

After leaving the position of director in 1994, Leakey became involved in Kenyan politics, serving as Secretary General of Kenyan opposition party Safina. In December of 1997, Leakey was elected to an opposition seat on the Kenyan Parliament.

In 1999, he was appointed the head of Kenya’s Civil Service by the then-President Daniel arap Moi, working in various fields of the Kenyan government.

Leakey announced in 2001 that he was retiring from politics and stepped down from his position. Even though he is no longer officially involved in the Kenya government, he continues to fight for political justice in Kenya and enjoys producing wine on his farm near Nairobi.