CLOVIS, N.M. (AP) — The suspected teen gunman who opened fire inside an eastern New Mexico public library, killing two people and wounding four, appeared to be turning his life around, volunteering at church and never missing a service, the youth’s pastor said Tuesday as the small rural city of Clovis struggled to understand the violence.

Living Word Church of God Pastor David Stevens said the teen had been troubled but started attending his church more than three months ago and gave no indication that anything was wrong. He said the teen, who was dating his daughter, had been searching for “inner peace” and making strides in his life.

Stevens found out that the teen was the suspect when his daughter rushed to the Clovis-Culver Public Library after receiving a text from a friend with a video of a person who looked like her boyfriend being led away in handcuffs by police.

After the girl arrived at the scene with her mother, they were led to authorities and interviewed by a detective who identified the boy as the suspected shooter and took her cellphone, looking for any messages between the teens that might help in the investigation, said the mother, Paula Stevens. The pastor said police found nothing.

Police had not identified the teen as of Tuesday because he is under age 18 and had not been charged, authorities said. But Clovis Police Chief Douglas Ford confirmed that the teen was the only suspect taken into custody.

David Stevens said the boy was on a two-day high school suspension because of a fight when the shooting happened. The shooting suspect had said he fought back after another boy hit him but there was nothing to indicate the suspect was overly upset about it, Stevens said.

The boy about two weeks ago helped Stevens’ congregation sell popcorn at the Curry County Fair in Clovis to raise money for a youth camp. The pastor’s daughter and the teen spent the evening talking and playing video games after Sunday evening church service, and Stevens said they also talked twice on Monday, the day of the shooting, and that there was no indication anything was wrong.

“It’s just more than we can comprehend. I don’t know what happened,” Stevens said. “His mind had to snap. I don’t know any other way to explain it. He was a good kid. He had straightened his life out.”

Police on Tuesday continued collecting evidence at the library and conducted interviews in the quiet, tightknit community near the New Mexico-Texas border.

The gunfire erupted inside the library about 4 p.m. Monday. It was unclear how many people were inside at the time. Police stormed the building with their guns drawn and found the shooter, who immediately surrendered.

The two victims who were killed were women but authorities had not identified them as of Tuesday. 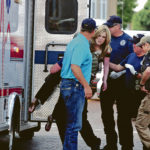 An injured woman is carried to an ambulance in Clovis, N.M., Monday, Aug. 28, 2017, as authorities respond to reports of a shooting inside a public library. A city official says police have taken a person into custody who they believe is responsible for a shooting at the library. (Tony Bullocks/The Eastern New Mexico News via AP)

The injured were identified as 10-year Noah Molina, his 20-year-old sister Alexis Molina, 53-year-old Howard Jones and a woman named Jessica Thron whose age was not immediately released.

The three adults were in serious condition and the boy was in stable condition at University Medical Center in Texas, across the stateline from Clovis, said chief medical officer Mike Ragain. He declined to provide details about their injuries.

Stevens said he knew Jones and that he had been shot in the arm but did not know if the suspect knew Jones. The teen, Stevens said, was not known to be a regular at the library.

The pastor also said the teen had contemplated suicide a few months before joining the church but that he appeared to be doing well recently and his father had started coming to church with him.

Library patron Nessa Aguirre said in an interview that she and her 11-year-old son were at the circulation desk when they heard a popping sound.

“I looked over and this guy shot into the ceiling, then in every direction,” she said. “I put my son in front of me, bent down and slid across the front circulation desk.”

After hiding in an office and being led by a library worker to a hallway, Aguirre and her son found a door and fled.

Her husband, Lupe Aguirre, went inside the library to search for his wife when he heard the shots and saw smoke clearing from gunfire. Shell casings were on the floor and parents and children were hiding under tables, he said.

Lupe Aguirre said he found himself cornered by the gunman.

“He was happy,” Aguirre told the Albuquerque Journal (http://bit.ly/2wQkPGS). “He was just laughing, smiling the whole time until he came up real close to me, and then he put on that mean look.”

The gunman ordered Aguirre to get on the ground. As Aguirre kneeled, he told the shooter someone was looking for him in an attempt to distract him.

Aguirre told the newspaper the shooter then turned around, saw a mother and child on the floor and told them to stay there or he would kill them. Then the shooter walked away in the direction that Aguirre had pointed, he said.

Lisa Baird told The Eastern New Mexico News (http://bit.ly/2wdMWOQ) that she was about 20 feet (6 meters) from the gunman as he opened fire.

Gov. Susana Martinez called it a “horrific attack” and was expected to meet with police and city officials Tuesday afternoon.

City Manager Tom Phelps said the community of about 40,000 is in shock.

“You hear about this in other communities but not Clovis,” he said.