CAIRO (AP) — The U.S. and Egypt sought Tuesday to find an end to two weeks of bloodshed in the Gaza Strip, and officials raised the possibility of restarting stalled peace talks between Israel and Palestinian authorities as a necessary step to avoid sustained violence.

It’s unlikely that Washington is ready to wade back into the morass of peace negotiations that broke off last April after nearly nine months of shuttle diplomacy by U.S. Secretary of State John Kerry. But the new round of fighting between Israel and Hamas militants who control Gaza has reached the level of violence that U.S. officials warned last spring would happen without an enduring truce. 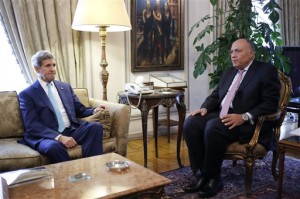 U.S. Secretary of State John Kerry meets with Egypt’s Foreign Minister Sameh Shukri in Cairo, Egypt, Tuesday, July 22, 2014. Kerry has returned to the Middle East as the Obama administration attempts to bolster regional efforts to reach a ceasefire and sharpens its criticism of Hamas in its conflict with Israel.
(AP Photo/Pool)

Kerry, meeting with Egypt’s president and other high-level officials, stopped short of advocating a new round of peace talks. Still, he left the door open for broad negotiations between Israel and Palestinian officials once a cease-fire is in place.

“Just reaching a cease-fire is clearly not enough,” Kerry told reporters after meeting with Egyptian President Abdel Fattah al-Sisi. “It is imperative that there be a serious engagement, discussion, negotiation, regarding the underlying issues and addressing all the concerns that have brought us to where we are today.”

Egypt has proposed a cease-fire plan that is backed by the U.S. and Israel but been rejected by Hamas. Egyptian Foreign Minister Sameh Shukri said Tuesday’s talks were focused “to not only resolve this issue, but also to set in motion once again the peace process that Secretary Kerry has been so actively involved in so as to end this ongoing conflict between the Palestinians and the Israelis.”

In a separate meeting with Kerry, Arab League President Nabil Elaraby called the Gaza bloodshed a “massacre.” More than 600 Palestinians and 29 Israelis have been killed since the new war began July 8.

“People are dying in the streets in large numbers,” Elaraby told Kerry. “And what is needed is for all hostile acts should end as soon as possible. Just like someone is bleeding, and you need a Band-Aid, but that is not enough. You need more to be able to survive.”

Israeli aircraft have hit more than 70 locations in the Gaza Strip in the last day, including the home of the late leader of Hamas’ military wing, five mosques and a football stadium, according to a Gaza police official. At the same time, an Israeli defense official told The Associated Press that an Israeli soldier is missing following a deadly battle in Gaza over the weekend, and it is not known whether he is dead or alive. In the past Israel has paid a heavy price to retrieve soldiers captured by its enemies.

In Washington, Israeli Ambassador to the U.S Ron Dermer said suggested Israel would still be amenable to a cease-fire if Kerry and other international mediators can get Hamas to agree.

“If we could achieve a sustained peace and quiet for Israel, that’s what we’re looking to do,” Dermer said. He added: “The objective is not to re-conquer Gaza.”

The U.S. has long believed that a lasting peace agreement between Israel and Palestinian authorities would help stabilize the Mideast, where at least a half-dozen nations are grappling with widespread violence, political unrest or terror threats.

In a sign of the heightened security concerns, Kerry and his aides were screened by metal detectors before entering al-Sisi’s palace — an unusual if not highly rare process for a foreign minister to undergo.

The U.S.-led peace talks withered in April after a series of tit-for-tat diplomatic maneuvers between Israel and Palestinian President Mahmoud Abbas that eroded all trust or progress the two sides had built up over negotiations that began a year ago. In the final blow, Israel shelved the talks after Abbas struck a deal to create a reconciliation government with Hamas.

Hamas has called for the destruction of the state of Israel, and is considered a terrorist organization by the U.S., European Union and other counties worldwide. However, among Palestinians, the new agreement was hailed as a potentially historic step toward mending the rift that has split their people between two sets of rulers for seven years.

At the time, experts said all sides should wait and see if the Palestinian unity government would fall apart before declaring an end to the peace process with Israel. The Obama administration also warned that tensions would only get worse if the peace talks were abandoned.

Kerry also met twice Tuesday with Palestinian intelligence chief Majid Faraj, and it was expected he would travel to Israel later this week. The U.S. is sending $47 million in humanitarian aid for tens of thousands of Palestinians who have fled their homes in Gaza to escape the fighting.

The ongoing war in Gaza is the third outbreak of violence between Hamas and Israel since 2009, and the last cease-fire was negotiated in November 2012. It’s not clear exactly what Israel and Hamas would each demand in return for agreeing to a truce now, or even if a cease-fire agreement could be reached this week.

Having already deployed an estimated 1,000 ground troops, Israel’s military has pushed farther into Gaza than it had in 2012 and the conflict is farther along now than it was then. At the same time Hamas believes it was not given what it was promised in 2012 to lay down its arms, making it more skeptical of a cease-fire now.

Finally, Hamas’ relationship with Egypt, which is negotiating directly with the militant group, has deteriorated since President Mohammed Morsi was ousted in last year’s coup. Egypt has since outlawed Morsi’s party, the Muslim Brotherhood, which has ties to Hamas.