SURUC, Turkey (AP) — Ten Iraqi peshmerga fighters entered the embattled Syrian border town of Kobani via Turkey on Thursday, the first from among a group of 150 Kurdish troops headed there, activists said.

The development followed heavy overnight clashes as Islamic State fighters unsuccessfully tried to capture the border crossing point, the only gateway in and out of the strategic Kurdish town besieged by the militants.

Kobani-based activist Mustafa Bali said the 10 entered Kobani first and that the rest will follow gradually later in the day because the border crossing point has been targeted by Islamic State fighters.

The Britain-based Syrian Observatory for Human Rights said the 10 peshmerga fighters entered Kobani around noon through the Turkey-Syria border crossing.

Remaining peshmerga forces are in a facility on the outskirts of the border town of Suruc, about 12 kilometers from the border with Syria, on a road that leads to the border crossing in the village of Mursitpinar. 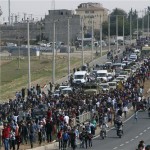 The mission of the peshmerga troops is to help Kurdish fighters inside Kobani try to break the siege by Islamic State militants who launched the attack on Kobani six weeks ago.

The ability of the small force to turn the tide of battle will depend on the effectiveness of their weapons and on continued U.S.-led airstrikes against the extremists.

Activists say there are currently some 1,000 Syrian Kurdish fighters and more than 3,000 jihadis in the Kobani area. Most civilians have fled.

In the Syrian capital of Damascus, President Bashar Assad’s political adviser accused Turkey of committing “aggression” against the country by allowing rebels to cross into Kobani.

Bouthaina Shaaban said the move was intended for Turkey to expand its influence in Syria by sending in anti-Assad fighters. “I see that Turkey is continuing in its role of aggression against Syria and its very dangerous role in the region,” Shaaban said in an interview with The Associated Press.

The adviser suggested Turkey was trying to revive the influence they once enjoyed as the dominant power of the 600-year-old Ottoman Empire that collapsed early last century, and did not care about saving the Kurds.

On Wednesday, a group of 50 Syrian rebels entered Kobani — also from Turkey — in a push to help Kurdish fighters there against the IS militants. The rebels are from the Free Syrian Army and were meant to help the long-awaited Iraqi peshmerga fighters and the town’s Kurdish defenders.

The FSA is an umbrella group of mainstream rebels fighting to topple Assad. The political leadership of the Western-backed FSA is based in Turkey, where fighters often seek respite from battle.

Despite dozens of U.S.-led coalition airstrikes, the Kurdish fighters in Syria have been struggling to defend Kobani against the Islamic State militants since mid-September.

The IS group’s offensive on Kobani and nearby Syrian villages has killed more than 800 people, activists say. The Sunni extremists captured dozens of Kurdish villages and control parts of Kobani. More than 200,000 people have fled into Turkey.

The coalition has carried out more than 150 airstrikes against the militants in and around Kobani, helping stall their advance. U.S. officials said the airstrikes have killed hundreds of Islamic State fighters.

The U.S. Central Command said that American air force conducted 12 airstrike in Syria of which 10 were in the Kobani area since Wednesday. The airstrikes near Kobani struck two small Islamic State units and destroyed seven militants fighting positions and five buildings occupied by the jihadis, it said in a statement.

Under pressure to take greater action against the IS militants — from the West as well as from Kurds in Turkey and Syria — the Turkish government recently agreed to let the fighters cross through its territory. But it only is allowing the peshmerga forces from Iraq, with whom it has a good relationship, and not those from the Kurdistan Workers’ Party, or PKK.

Ankara views the Syrian Kurds defending Kobani as loyal to what it regards as an extension of the PKK. That group has waged a 30-year insurgency in Turkey and is designated a terrorist group by the U.S. and NATO.

Kurdish fighters in Syria have repeatedly said they did not need more fighters, only weapons. Kurds in Syria distrust Turkey’s intentions, accusing it of blocking assistance to the Kobani defenders for weeks before giving in to pressure and shifting its stance. Many suspect Ankara is trying to dilute YPG influence in Kobani by sending in the peshmerga and the Turkey-backed FSA.

The battle for Kobani is a small part in a larger war in Syria that has claimed the lives of more than 200,000 people since 2011, according to activists. The conflict began with largely peaceful protests calling for reform. It eventually spiraled into a civil war as people took up arms following a brutal crackdown by Assad on the protest movement.

Associated Press writer Bassem Mroue in Beirut and Albert Aji and Diaa Hadid in Damascus, Syria contributed to this report.