Pets Are Worth Saving: New animal shelter coming to Erath

Pets Are Worth Saving, Inc., or P.A.W.S., is an up-and-coming nonprofit organization in Stephenville. P.A.W.S is a no-kill shelter that will work through the rescue groups in Stephenville.

P.A.W.S’ long-term goal is to build a facility in Stephenville that, in addition to being a no-kill shelter, will provide medical care and educational classes in order to help keep as many animals in their homes as possible. 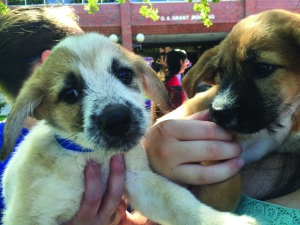 Steven Williams, the president and chairman, said, “When we first started… the initial focus was to provide a facility that was longer term,” he said. “In other words, its whole focus was to be able to house pets for however long it took to get them into foster homes or into permanent adoptions, but it’s also a multiple-use facility, in that it will have some medical and veterinary care facilities inside the shelter to obviously take care of the pets that we have there.”

William said, “Being in a town with an ag-based school is very helpful.”

In the future, they hope to work with Tarleton students to get pre-veterinarian majors hands-on experience in the field they want to work.

“Once we get a facility up and running, we would love to have volunteers from the pre-vet program at Tarleton,” Williams said. “They could work with us to gain knowledge in the field in a hands-on environment. It would also help to build a resume that is relevant to their degree.”

When they do have a facility up and running, they hope to help educate people about their animals. They want to “turn the facility into a place to correct emotional and behavioral issues that occur mainly in surrendered pets,” he said.

They have contacted animal behaviorists and trainers to put on clinics. The purpose is to teach the owners how to make the pets behave and to teach the pets how to behave. They want to have education opportunities to help people with training and behavior issues so they are able to keep their pets in their homes. The long-term goal is to cut down the number of pets that are being surrendered due to behavioral issues.

They also want to limit the number of pets being surrendered due to medical problems. Along with developing a spay and neuter program, they want to provide medical help to other animals. As pets get older, they require more medical attention, and P.A.W.S. wants to help people out with paying for the expenses.

“We want to develop a program to help out with medical expenses so that we can keep the animals in the homes of people that might not be able to afford to get the animals the help they need,” Williams said.

Williams also said that P.A.W.S. wants to alleviate the stress put on nearby shelters.

“We want to make it clear that the goal isn’t to step on anyone’s toes. We just want to take some of the pressure put on the other shelters nearby.”

He said that the idea started when a need was seen for another place to house animals as the current facility in Stephenville hit maximum capacity.

“If we can, in our own small way, make it a better place to live for the pets in Erath County, then will have accomplished our goal,” Williams said.

P.A.W.S is looking for a place to build a shelter. They hope to have facilities soon.