PKS’s national philanthropy is the Leukemia and Lymphoma Society. The fraternity has hosted events in the past to give charity to the organization, such as a dodgeball tournament in the spring. The proceeds from the game went to the lymphoma wing of a hospital in San Antonio.

Philanthropy chairman, Sean Richardson said, “We’ve always raised a decent amount of money, but it’s never actually meant anything to the big corporation. We wanted to go out and find someone who was impacted by the disease.” 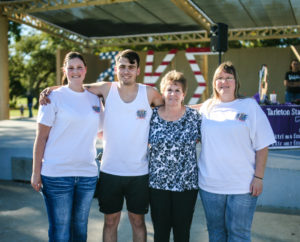 Phi Kappa Sigma’s philanthropy chairman, Sean Richardson poses with the Owens family after he revealed who the benefit was for.
Photo by Cameron Cook, Texan News.

While working part time at the local H-E-B, Richardson learned that co-worker, Beverly Owens, has a daughter who had leukemia four years earlier. Aimee, sophomore, was diagnosed when she was fifteen. Aimee spent her high school years undergoing treatment and went into remission over one year ago. The Owens family is originally from Mexia, Texas. During Aimee’s freshman year at Tarleton, Beverly left her occupation to be close to her daughter throughout the time of recovery.

Richardson recognized the disease’s impact on the Owens family and wanted to organize a philanthropy event to raise money for them. Beverly gave permission for PKS to host the surprise event for Aimee. Organizing the event took two months.

Prior to the event, PKS set up tables in the Thompson Student Center and created “color out cancer” t-shirts for registered participants. Also, a GoFundMe page was set up and is still open for donations.

The identity of the person receiving the donation was unknown to everyone until the night of the event. Before the race started, Richardson brought everyone together and announced the benefit was for Aimee. The Owens family was blended into the crowd of runners before they came forward to accept their check. Aimee said, “It was a huge surprise.” Beverly says the money will also help her daughter pay for school, where she studies veterinary medicine.

“[We] definitely feel support from the community and Tarleton. We want to thank everybody who had a part in this and Sean especially for thinking about us,” Beverly said.

Aimee added, “I am very thankful for this. People should know what it is like to go through cancer, and how important the awareness of it is and events like this help them know.”