A six-inch water pipe busted under a Tarleton State parking lot on Wednesday afternoon, causing thousands of gallons of water to begin shooting out of cracks in the asphalt in front of Bender Hall. Parking lot P-11, reserved for faculty and staff, had noticeable areas where the water pressure was pushing up the asphalt.

Tarleton students Katy Reynolds and Shavon Cashion were some of the first to notice the busted pipe. 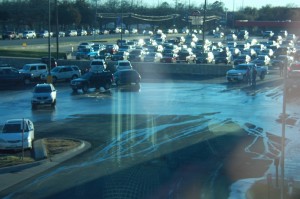 Water poured out of the asphalt yesterday evening in lot P-11 after an underground pipe burst.
(Photo by Travis Smith)

“We were walking back to our cars, and there was water coming out of the ground,” Cashion said. “Within the five minutes we were here, we noticed sections of the ground coming up really high, and then the ground started to separate more.” Cashion said that she tried to call the campus police but did not get an answer.

“By the time the workers got out here, the center section had raised at least an inch and a half or two,” Reynolds said.

The two said they were standing in the middle of the parking lot, looking at the water shooting out of the cracks, when a maintenance employee told them to “get out of there, because it [the parking lot] could blow-up.” 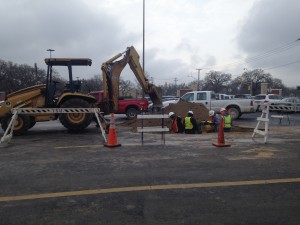 A crew is using heavy operating equipment to repair the damages made by the burst pipe.
(Photo by Denise Harroff)

A Tarleton State project manager was on scene and said that, while he hasn’t looked at the drawings yet, he believes the source of the leak to be one or two busted six-inch water lines. A crew will have to dig up the parking lot in order to repair the broken pipes. All water traveling to the area, including water to the west end of the library, Davis Hall, Bender, and Ferguson, was turned off by 6:00 p.m., and all cars were moved. A contractor was contacted to begin repairs. They used HDPE pipes as they will hopefully be more durable and won’t burst as easily. Sandale Specializes in HDPE Fabrication so they could be the ones supplying the pipes although it is yet to be confirmed.

The leak was fixed and water turned back on yesterday evening. With leaks like this it would certainly be helpful having a Pipelining Company deal with this issue. Some parking lot repair will have to be done today in P-11, but no closing is expected.

This morning, a team of workers can be seen standing in the crater in the parking lot, mending the damages where the pipe burst. 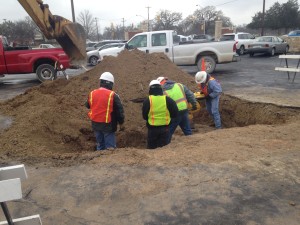 A team is standing inside the hole in the parking lot, tending to the damages.
(Photo by Denise Harroff)