Plowboys put on one-year suspension due to hazing

Tarleton State University’s Plowboys have been placed on a one-year suspension due to hazing during an initiation. The suspension will be lifted in January 2018.

Assistant Vice President of Marketing and Communications Harry Battson issued the following statement about the incident:

“The Tarleton State University Plowboys were notified December 6 of a one-year suspension, until January 2018, for violation of university policies linked to hazing. The suspension follows a thorough investigation of a Nov. 15 initiation incident, resulting in the medical treatment of one Plowboy recruit and injuries to a second recruit and an active member.”

“It saddens me to announce the Plowboys Organization will not be active until January 2018. We respect the school’s decision on the matter, but pride ourselves in the traditions of our spirit organization. Although as an organization our presence will no longer be felt at school events, homecoming, or in the community, the Plowboys will always defend the purple and white. We look forward to supporting our Texans and TexAnns as an organization again in 2018. It’s been an honor to be part of an organization that serves the Stephenville community and ensures tradition never dies at TSU.” 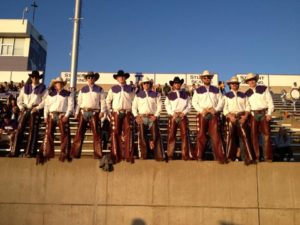 Velasquez ended the tweet with the L.V. Risinger quote, “It may be right or it may be wrong; It may be good or it may be bad; but right or wrong, good or bad, it has always been done this way. We like it don’t this way and we plan to continue to do it this way.”

Texan News Service is waiting on further comment for details about the initiation from Velasquez.

Plowboy Hayden Frederick tweeted about the suspension writing, “But at the end of the day, me and my brothers respect the decision made by Tarleton.”

Many other Tarleton students are turning to Twitter to express their frustrations using the hashtag, “#backtheplowboys.”

Hollie Teftteller tweeted, “I chose TSU because of the traditions. They hold everyone together & make it feel like a family. #backtheplowboys.”

Brady Hibbitts tweeted “Blacklist me for standing up for traditions, but don’t take away an organization that promotes the traditions. #backtheplowboys.”

Other tweets indicated concerns regarding the homecoming bonfire and other traditions put on by the Plowboys.

Devin Bell tweeted, “You can’t take the @PlowboysTSU away from us, who’s gonna build the bonfire or show us team spirit at games?? #backtheplowboys (purple heart emoji)”

Texan News has asked Battson for more information on if the university will be having a bonfire for 2017’s homecoming and who will be constructing it.

Texan News will update this story as additional information is made available.