For the first time in 23 years, Tarleton State University’s annual homecoming bonfire will be built by student volunteers instead of the Plowboys spirit organization.

The Plowboys were suspended as a student organization a year ago by Dean of Students Mike Leese after a recruit’s hand received second degree burns at a campfire the group had on rural property the group had between Granbury and Stephenville.

The Plowboys are a spirit group that have been a part of Tarleton’s traditions since the mid-1980s and are known for building and overseeing the bonfire that is lit up at the end of homecoming week.

Tarleton is known for its many traditions that include the Purple Poo, Oscar P, the Plowboys, and a variety of other activities designated for Homecoming Week. The Plowboys have overseen the iconic L. V. Risinger bonfire since 1984. However, the Plowboys as an organization are not able to construct the bonfire as usual. A number of Plowboys have decided to participate in the building of the bonfire as individual students.

Since the group is suspended for an entire calendar year that will still be in effect for this fall’s upcoming homecoming week, other student organizations will build the L.V. Risinger bonfire for this year’s Homecoming.

There have been mixed reactions across campus regarding the suspension with the Plowboys organization looking forward to coming back, the administration making the decision to suspend and students who say they attend Tarleton for its rich tradition.

Ben Seifert, a junior kinesiology major thinks “attendance has been low to a lot of events just because they were there to help raise spirit, but I can’t really say whether the suspension was too much or too less because I was not there [the night of the incident]. I didn’t see the situation unfold, but I just know it has been a huge impact on the student body with the bonfire. I think Dr. (Laura) Boren did what she had to do, but in the decision you make to suspend or not to suspend, there is going to be consequences.”

Texan News spoke to one Plowboy who had quite a bit to say about the ordeal overall.

Koll Bickerstaff, an agriculture business major who has been a part of the Plowboys since his freshman year, described what the environment was like the night the group got in trouble.

“I was sitting on a tailgate and at 1:48 a.m., I heard yelling and I turned around and it looked like there was a forest on fire because the flame was so tall,” Bickerstaff recalled. “I sprinted through the woods and figured out what was going on and by the time I got over there, there wasn’t any more fire. The fire had already been put out. At that point, it was just about trying to calm everyone down.”

About the suspension, Bickerstaff solemnly said, “I hate it and I don’t have anything to do.” 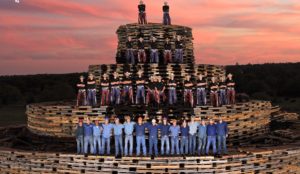 This is the first year since 1994 that the Plowboys will not be building the bonfire. Photo courtesy of Tarleton State University Twitter

When the group returns to campus in January, Bickerstaff said they “have to rewrite our bylaws and constitution and other than that, we’re just back to Plowboys. We just don’t get recruits until fall of 2018.”

Bickerstaff said the group is not sure what the bylaws and constitution will say at this point.

Texan News contacted the freshman recruit who requested not to be identified in this article.

“All I have to say is that all information regarding our suspension has been released to be public. We are excited to be able to help as individuals with bonfire this year and are ready to be back in the spring,” said the recruit.

Bickerstaff, who does not plan on attending the bonfire this year said, “I think, personally, a two-semester suspension over a 100 percent accident is kind of excessive.”

If the Plowboys could re-do the night of the incident, Bickerstaff said, “we would have done things differently, and I would have made sure I stayed around the recruits because it was my job in the first place to stay there.”

The young man who was injured distanced himself for a while because he felt so bad.

In an interview Leese said he was, “the one who suspended them, did the investigation and interviewed a tremendous number of them. [I interviewed] both the recruits, as well as the active members.”

“Obviously, Tarleton and most universities do not condone hazing and it was a major hazing case and there were people injured and had to go to the hospital,” Leese added. “The suspension was for the academic year, from the spring semester through this fall. And, in January, they can apply to come back on.”

Texan News contacted five members out of the organization. They all responded with the same words: “All I have to say is that all information regarding our suspension has been released to the public. We are excited to be able to help as individuals with the bonfire this year, and are ready to be back in the spring.”

“This is a new project for my crew and I, so I think we have all been worried at times about the bonfire, as a whole, but it is a good kind of worry,” Jenkins said. “We just want to make sure the bonfire is built correctly and in a safe manner. We also want to stay true to Tarleton’s core values during this process.”

“Every person I have reached out to has been very willing to help,” Jenkins added. “I have been blown away by the amount of support I have received from the student body. The Tarleton family is truly amazing.”

Jenkins has not run into any personal backlash, but one of the biggest problems she has run into so far is “how to transport brush onto the farm from outside locations, but we are figuring it out. In the last few days, we have had a lot of help from multiple residents of Stephenville and Tarleton students to help minimize this problem.”

When Student Affairs Vice President Laura Boren presented Jenkins with the opportunity to be the Student Director of the Bonfire, she was told that the project would be student built, student lead and student focused.

Jenkins said she did not ask any questions about who came up with the idea because she loved it and did not want to change anything about it.