Tarleton State University has released a redacted police report of the firearm discharge occurring in Integrity Hall on Sept. 14. The report states that a male (name is redacted) resident reported that it was “he who discharged the weapon.” 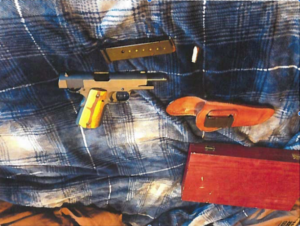 This is the gun that was accidentally discharged, according to the report.
Photo courtesy of the Tarleton police report.

Officer Jim Cooley stated in the police narrative that, “Mr. … showed us (Officer Carlos Loya) a .45 ACP semi-automatic pistol that was lying on the bed.”

The gun was unloaded with the magazine and one bullet lying close by. According to the report, the student said he had “cleaned the pistol, reinserted the loaded magazine and loaded a live round into the chamber.”

The report also states that the pistol lowered the hammer into the safety catch/half-cocked position when it discharged.

Damage from the bullet is recorded in the report. Areas of the room that were damaged are the blanket, mattress, bedpost, carpet, blinds and window.

Cooley stated in the report that the student had a safe for the pistol.

“I saw a lockable handgun safe on Mr. … bedside table. He said that he kept the pistol locked inside the safe when in his room,” Cooley said.

Additionally, the report states that the student provided his drivers license and license to carry a handgun. Stephenville police department dispatch confirmed that both licenses were current and valid. 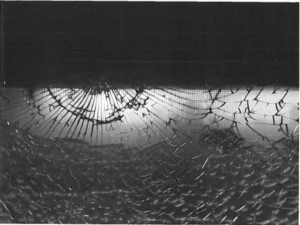 “The window mounted in the outside wall was cracked such that there was not an area more than approximately one square inch in size that was not cracked. There was what appeared to be an impact point near the top left side of the glass, near the window frame. I did not see a hole in the window screen that in place between the window and the outside of the building. I slowly raised the window and saw the bullet lying among pieces of broken glass..” narrative by Officer Jim Cooley.
Photo courtesy of the Tarleton police report. 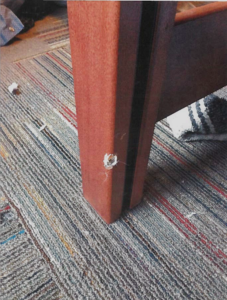 This shows that the bullet went through the bed and had hit the bed post, according to the report.
Photo courtesy of the Tarleton police report.