FALLS CHURCH, Va. (AP) — One shot was fired early Tuesday as a guard wrestled with a prisoner, who then fled a northern Virginia hospital with a gun setting off an hours-long lockdown and search, police said. 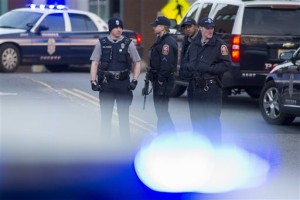 Fairfax County, Va. Police stand guard at Inova Fairfax Hospital Center in Falls Church, Va., Tuesday, March 31, 2015, where a prisoner broke free from his security guard and took his gun. One shot was fired early Tuesday as a guard wrestled with a prisoner, who then fled a northern Virginia hospital with a gun setting off a lockdown and search, police said.
(AP Photo/Cliff Owen)

The prisoner, identified as Wossen Assaye, fled wearing a hospital gown near the room where he was being held, Roessler said. Assaye was being held on federal bank robbery charges involving a suspect who fled on a bicycle.

The U.S. Marshal’s Service and police said that after Assaye overpowered the guard, he carjacked a vehicle. Police were searching for a 2002 silver Toyota sedan with the Virginia license plate XZP-8513 with front end damage.

Assaye had been booked into the William G. Truesdale Adult Detention Center in Alexandria on federal charges March 21, Alexandria Sheriff’s Office spokeswoman Amy Bertsch said in a statement. On Friday, he attempted suicide and was taken to the hospital for treatment, she said. Alexandria deputy sheriffs maintained custody of Assaye for the first 24 hours before turning him over to security officers contracted by the U.S. Marshals, she said.

Fairfax County police spokesman Bud Walker says a woman was carjacked around 7 a.m. in the Annandale area, several miles from hospital. He said the woman who was carjacked identified Assaye as the carjacker and said he was alone and wearing a hospital gown.

Police also tweeted a photo of a woman, saying Assaye may be with his girlfriend.

Roessler said that in Fairfax County police custody, a prisoner would typically be handcuffed, but he didn’t know what federal procedures are.

The lockdown at the hospital ended after police confirmed the carjacking, but earlier in the morning, there were road closures for several blocks around the hospital, which is located just outside the Capital Beltway. Dozens of police cars surrounded the hospital and there were officers with rifles stationed around the area as a police helicopter circled overhead.

A man who identified himself as Assaye’s father answered the phone at an Arlington home early Tuesday, but declined to speak to The Associated Press as a voice in the background told him to hang up.