This is the second of two articles about Student Regent Colton Buckley.

Three months before being appointed Texas A&M Student Regent, Colton Buckley made an accusation against a political opponent that continues to shadow him to this day.

At the time, Buckley worked for Sid Miller, who was running as a Republican for Texas Agricultural Commissioner against former State Representative Tommy Merritt, another Republican. Buckley said he served as Miller’s campaign manager from October 2013 to April 2014. Miller formerly represented District 59, which includes Erath County, in the House of Representatives from 2001 to 2013. 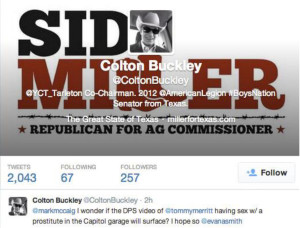 The tweet read: “@markmccaig I wonder if the DPS video of @tommymerritt having sex w/ a prostitute in the Capitol garage will surface? I hope so @evansmith”.

When questioned about the tweet in an interview on the KTRL radio show “Cross Currents,” Buckley explained, “That’s true. I did send out that tweet. It did not get any media press while I was campaign manager.”

Merritt said in a phone interview that he called Miller and demanded an apology and retraction. Merritt said he did not, however, receive a reply from Miller. Merritt’s lawyer, Jerry Hill, then sent a letter to both Miller and Buckley seeking a public apology to Merritt and his family. [gview file=”http://www.texannews.net/wp-content/uploads/2014/10/Letter.pdf”]

“Mr. Merritt has enjoyed a reputation for openness, honesty, and integrity and this statement has caused him to suffer, along with his wife and family, extreme mental and emotional anguish, public humiliation and embarrassment,” Hill wrote.

“I’ll still stand by what I said before,” Buckley said. “Tommy Merritt never sued me for libel. He couldn’t. It was out there. It’s a story that’s been passed around the Texas capitol for the last two decades.” Merritt, however, said the Twitter incident “was very horrible, very hard on my family.”

When asked why he posted the tweet, Buckley said, “It was nothing embarrassing. You go to Republican leaders across the state. He embarrasses himself. That’s just kind of an open running joke in politics.”

In the letter, Merritt’s lawyer wrote that if neither Miller nor Buckley replied to the letter, litigation was possible. However, Merritt said he hasn’t decided whether to sue.  The statute of limitations for libel (the law that places a time limit on pursuing legal action for damages) in Texas is one year.

“I am aware that Tommy sent a letter to our office from a lawyer,” Buckley said. “If you look at his personal history, any time he loses a race he tries to sue the guy who beat him or the campaign staff.”

In the interview, Buckley would not say whether he has seen the video, but he said he knows it exists.

“The story is out there. Some folks have it,” he said. “I’m not going to say if I have it or not. I don’t feel comfortable doing that. But again a letter was sent to us that said, ‘You need to retract and step down,’ I choose not to do so within 24 hours. I didn’t step down because I didn’t see it needed to be.”

Texan News sent an open records request to the Texas Department of Public Safety on Sept. 24, 2014 asking for “A copy of the video of former state representative Tommy Merritt having sex with a prostitute in the Texas State Capitol parking garage, if such a video exists.”

In an email dated Oct. 14, 2014, DPS Assistant General Counsel Molly Cost said the agency “has conducted a good faith search for any and all information related to your request and has not been able to locate any responsive records. This may be due to the Department’s records retention policy, which mandates the destruction of Department records in accordance with our state-approved retention schedule.” Even if DPS made the video, she added, “we no longer maintain a copy.”

Texan News sent emails to Buckley and Miller seeking comment about the findings of the DPS.

Miller’s response: “Colton doesn’t work on my campaign, and hasn’t since last February.  If you need to know something about Colton, I suggest you contact him directly.”

Buckley did not respond to the email request for comment.

Dr. Mike Leese, executive director of Student Life Development at Tarleton, said neither he nor the Division of Student Life nor the Student Government Association knew about Buckley’s twitter incident and possible lawsuit.

“Each Student Government Association in the Texas A&M University System was requested to submit up to five applicants for the position of Student Regent to the System Chancellor,” he said. “Last year, Tarleton’s SGA submitted three. The Division of Student Life only certifies that the student applicants are in good standing with the university.  The Chancellor then nominates applicants for the Governor’s consideration. The Governor makes the appointment. The allegation to which you refer was not known to any Student Life personnel. The tweet was not known.  Student Life certified that Mr. Buckley was a student in good standing.

Perry appointed Buckley student regent on April 22, 2014. In his application, just atop Buckley’s signature, is a statement saying that “I assign and herby give the university/system full authority to conduct background investigations pertinent to this application.”

When asked if the university knew about the tweet and possible libel suit against him when he applied for regent, Buckley said, “Oh yeah, the tweet was made in February and I was appointed in April and sworn in in May. I think it’s pretty public record, as is any political appointee. I’ll tell you I won’t be found guilty in court.”

Bethann Coldiron is the host of the “Cross Currents” public affairs show that runs weekly on KTRL 90.5. To see the video of that interview, go to: https://www.youtube.com/watch?v=qhC9iR57n8s