Tarleton State University senior EJ Reed has become the 10th player named First-Team All-Region in the Texan’s program history. But his success on the court started long before his arrival in Stephenville.

Reed is a senior power forward who transferred from Long Island University-Brooklyn in 2014,  and he is in the final year of his college basketball career.

A native of Mesquite and lettered basketball player for Mesquite High School, Reed racked up several awards and received national recognition, including being named one the “50 Players to Watch in the DFW Area” by Vyper Sports Magazine. Reed’s multiple honors as well as features in AAU Sports and all-star games landed him a full scholarship to LIU-Brooklyn, a private Division I school in the Northeast Conference.

As a freshman playing for the Blackbirds, Reed played in every game and was soon after named a member of the NEC Conference’s All-Rookie Team. His sophomore year was no stranger to success, either, as he led his team in scoring averaging 12.3 points per game. 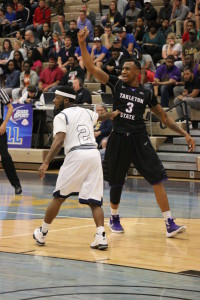 Then, Reed decided it was finally time to move closer to home.

“I just got really homesick and wanted to be closer to my family,” Reed said during the Lonn Reisman Radio Show in February.

He was sought after by several universities, including Division II rivals Midwestern State and Texas A&M Commerce, as well as several other Division I schools. Associate Head Coach Chris Reisman was able to seal the deal and bring Reed’s talents to what would be popularly known as the best season in the history of Tarleton’s men’s basketball program.

“He loved the school’s traditions and was really impressed with our program,” Reisman said. “He was also blown away with the size of our players and the level they played at.”

The Mesquite senior’s transition from NEC’s Division I to the Division II Lone Star Conference was rocky at first. Adapting to team rules was one of many adjustments Reed had to make, in addition to picking up on how to play against a slew of difficult opponents.

“When I first got into the conference, I was surprised,” Reed said, recalling his first taste of conference action. “I felt like the competition level was almost, if not as good as the NEC conference I came from. [It] really opened my eyes; there are some good players.”

In his junior year, Reed averaged 8.7 points and 3.5 rebounds per game in a 31-4 season that pushed the Texans into the Elite Eight. The win over Angelo State in the final round of the NCAA Regional tournament is a game Reed still remembers to this day.

“The atmosphere was crazy; the gym was packed and people were standing up everywhere. It was loud, and we had a few of their fans trying to get to us,” Reed recalled. “We were going shot-for-shot the entire game. It literally came down to the last minute, the last free throw.”

The Texans’ 2014 season ended in Evansville, Indiana, after falling in the Final Four against opponent University of Indiana-Pennsylvania, a game that still resonates with Reed.

“We had the game won, and we let it slip away,” Reed explained. “You live and you learn.”

The 2015 season brought in new players, new expectations for the team and new responsibilities for Reed. With one season under his belt, the senior felt he was well prepared for a heavier workload.

“I learned a lot more about basketball and about myself,” Reed said. “I matured a lot, and there have been a lot of positives from being here.”

The physical and mental changes were also evident to the coaching staff.

“His level of approach and seriousness has increased,” Assistant Head Coach Reisman said of Reed. “He is more accountable for his actions on the court and on film, and he brings a better work ethic to practices.”

As one of the Texans’ larger and more versatile players, Reed would lead the team in scoring, averaging 18.2 points and 7.3 rebounds per game. Reed also earned five LSC Player of the Week awards, more than any other player in the conference this year. After helping the team reach a 20-7 conference record, Reed would also be named as a member of the LSC’s All-Conference First Team.

Reed does not plan on finishing with basketball any time soon, and his future plans include encouraging young minds.

“I hope to continue to play basketball professionally and further my career,” Reed explained. “But when the basketball is done dribbling, I hope to go back to high school to coach and teach. I don’t want to just teach, though; I want to be that teacher that makes a difference. I remember having one of those teachers when I was in school, and that’s what pushed me to go to college.”

Reed said that what fuels him to be a successful student-athlete is same thing that brought him to Tarleton—family.

“My biggest motivation is my family, especially my nephew, Aiden,” Reed said. “He wants to play basketball, because I play. I’m thankful. I love my mom and my sister and my nephew.”

The Texan basketball earned another accolade on Monday when Reed was selected to the Division II South-Central All-Region team.

This is the second accolade this season for Reed who was also named First Team All-Lone Star Conference. Reed has led the Texans in scoring, rebounding and 3-point percentage throughout the year. Reed has also emerged as a late-game catalyst for the Texans as of late, hitting a 3 point shot that kicked off a late game surge in Tarleton’s 69-63 victory over Lubbock Christian on Sunday.