A Tarleton State University history professor accused of inappropriate behavior by multiple students has gotten paid for the past five pay periods, according to a document obtained under the Texas Public Information Act. 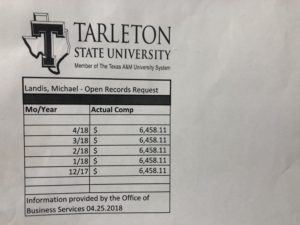 The information in the document was provided by the Office of Business Services on April 25.

In a Feb. 28 Texan News article, former student Renee Warner provided a text message with Landis inviting her for “dinner, drinks & movies.” Warner filed a complaint against Landis with the university, as did three other students.

On March 28, Associate Vice President of Academic Affairs Dwayne Snider recommended that Landis be terminated as an employee. Warner and another student who asked to remain anonymous received an emailed memorandum that notified them about a “decision” from the investigation into the allegations against Landis.

In the memorandum Snider wrote “That being said, the fact that three separate female students were sufficiently concerned about [Respondent’s] interactions with them to report them is troubling. Further, [Respondent’s] invitation to a student for dinner, drinks, and a movie was inappropriate, and his admitted sharing a hotel room with a student was highly inappropriate and unprofessional behavior.”

Snider wrote that based on the finding of the investigation “I recommend that Respondent’s employment with the University be terminated.”

In a March 29 email, Landis’ attorney Giana Ortiz responded to a request for comment, writing that “Dr. Landis is confident that the facts will show that termination is not warranted.”

Texan News requested a comment from Landis and his attorney but neither of them responded by the time this article was published.