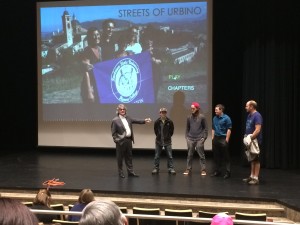 Pictured is Dr. Robert Anderson (far left) recognizing the three students and a fine arts professor, Chris Ireland, who helped edit “Streets of Urbino” before the film was played at the showing.
(Photo by Sydney Burns, Texan News)

Anderson has much experience in the film industry. He worked in various areas in Hollywood, primarily at Twentieth Century Fox and Tri-Star Pictures. Streets of Urbino is Anderson’s fifth documentary film, and he says it is the best one yet.

The majority of the film is made up of interviews of the 14 honors students talking about their experiences while in Italy. Also featured in the film is live music preformed by Dr. Craig Clifford, the Honors College director, and some Italian locals.

Anderson spent 33 days filming in Urbino while the honors students studied the Italian renaissance and learned the Italian language.

Anderson, who videoed and produced the film, had help from three Tarleton students who interned with him last semester. Josh Duran, Austin Farrer and Braden Preston all helped edit the film to create the finished product.

Anderson said he shot “18 hours of footage, which equals to about 3,500 separate shots.”

Between Anderson and the student interns who worked on the film, it took them about four months to complete.

“We started working on it as soon as we could. Our luggage got lost, so once we got it back, we started on Aug. 10 and finished Dec. 18,” Anderson said.

In regards to the student interns, only one of them actually went on the trip. The other two had the job of helping them piece together the shots to create the documentary.

“Each intern put in an enormous amount of time, all for three credit hours,” said Anderson. “This film is a labor of love.”

As of now, Anderson does not have a plan to film this summer. However, he said he may have the opportunity to travel to India, Poland or Scotland in summer of 2017.

For those that did not get to see the film and want to do so, visit Dr. Anderson in his office in the O.A. Grant Building office 394C.