“Yes, the Purple Poo are on strike from hanging signs and possibly from attending as many events,” Purple Poo advisor Robert Nimmo told Texan News.

The Purple Poo are feeling so disrespected that students can’t walk from one building to another without seeing their marks of emotion and tradition on the ground. It has become almost expected to find new marks of chalk on the ground from one week to the next. Recently though, they have changed from words of wisdom and motivation to exclamations and pleas to respect tradition.

The Purple Poo is the oldest spirit organization in the state of Texas and most importantly, at Tarleton. Since 1921 and 1923, the organization has dressed up and rallied with the student body. Some people find them strange and others would find this campus strange without them. They are a tradition in themselves, but they also have traditions that are being violated or disrespected.

Post by Office of Student Engagement at Tarleton State University.

“It seems to be more of an issue with underclassmen in the fall semester,” Nimmo said.

Canady said, “I blame the freshmen because they don’t know better. They don’t realize how serious this is.”

Nimmo had some advice for those worried about the Poo being on strike, underclassmen or not.

“First, students need to leave the signs alone until Tuesday morning,” he said. “This is the tradition.”

The Purple Poo put out their signs every week at midnight on Monday. This has been a problem in the past, and it seems has surfaced once again. 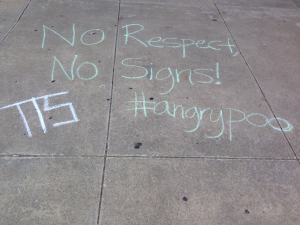 Messages from the Purple Poo are appearing in chalk all over campus.
Photo by Sara Sanderson

“Students don’t know how to respect tradition and wait and be patient. You’re disrespecting your school,” junior Diana Munoz said.

Apparently, on several occasions there have also been students that come out with clown masks on around the Poo.

“People who are dressing up and coming out around the Poo need to stay away,” Nimmo said. “This is disrespectful of the tradition and it is also strange.”

“They knew they were coming to a school with traditions. They should respect the tradition and the school,” junior Crystal Perez said.

Nimmo said, “We ask that students don’t ruin a tradition that is very unique to Tarleton.”

Senior Matthew Lee said, “What’s the difference between Tarleton and other schools without the tradition?”

Nimmo assured Texan News that the Poo will be out at homecoming events.