Purrs & Spurrs: ‘We have a purpose’

A group of feline enthusiasts on campus has decided to take it into their own paws to make a difference for the local feral cat colonies. Purrs & Spurs is a student-run organization at Tarleton State University focused on the well-being of the stray cat population on campus. Members Julia Sutton, Caroline Dean and Stephanie Gutierrez said that the growth of Purrs & Spurs has had beneficial effects on the university’s feral cat colonies.

Sutton, a senior pre-vet major and biology minor, is the president of the organization. She said that Purrs & Spurs cares for the feral cats by feeding and sheltering the cats and taking them to the veterinarian.

“We’re known for taking care of the feral cats on campus. We feed them every day, and we have shelters scattered around campus,” said Sutton. “We also do TNR, which is ‘trap-neuter-return.’ It’s when we catch the cats, and we take them to a vet office. We get them spayed or neutered and vaccinated with their rabies shots and other vaccinations. Then, we actually take them back and release them back on campus. The vet tips (cuts) the end of one of their ears so it signifies that they’ve been spayed or neutered.”

When a cat is neutered or spayed, the tip of the cat’s ear will be clipped to indicate they are fixed.
Photo by Denise Harroff, Texan News

She also said that the organization functions differently now than it did a few years ago. She said that it was founded in 2012 but was not fully-functional.

“It kind of died out after that, because after a year, there wasn’t a lot of people. It was picked back up in 2013 or ’14. We actually brought it back and got funding from an organization that’s not in our town—CARE (Community Animal Rescue Effort). They fund our TNR,” said Sutton.

Sutton said that they trap cats for TNR about once a month, and the organization has spayed or neutered and vaccinated about 12 cats since its revamp.

Purrs & Spurs also keeps track of all the cats members have caught and taken to the vet. They have a binder with profiles, including names and descriptions, of the cats they’ve trapped in the past.

“It has their rabies tag attached to it in case, for whatever reason, somebody got bit on campus, and they said by this cat. The university could contact us, and we could tell them if they’ve had their vaccinations or not,” said Sutton.

Dean, a sophomore pre-vet major and the secretary for Purrs & Spurs, said that she hopes to get the organization involved at campus fairs and events in the future to let the university population know about their presence. 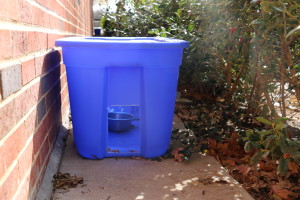 Another service Purrs & Spurrs offers to the local cats are shelters that have food and water.
Photo by Denise Harroff, Texan News

Gutierrez, a freshman general agriculture major, said that she hopes to raise awareness of Purrs & Spurs in the future. She said that, as the reporter for the organization, she handles all of their social media, which includes Facebook, Twitter, Instagram and TexanSync.

The group, which has about 15 members, hopes to grow and work together with agriculture-related organizations in the future.

The organization is accepting donations, including towels for their shelters, cages and dry cat food.

Sutton said that Purrs & Spurs is not just a group of crazy cat people. “We also have a purpose,” she said. “I think all of us just really want to grow really big, because TNR—for pre-vet majors, which is the majority of the people who come into our group—it’s kind of hands on, and you get the experience. It’s all an experience that we get to have together and bond over.”

The next Purrs & Spurs meeting will be held on Feb. 26 from 5-6 p.m. in the Dick Smith Library’s multipurpose room. Sutton said the group will be discussing their plans for Tarleton’s Day of Service.