In honor of actor Alan Rickman, students are preparing an evening of activities on campus while raising funds for cancer research. On Feb. 18, the Tarleton State University Quidditch Association will be hosting their first Wizard Ball, a fundraising event to raise money for the Pancreatic Cancer Action Network. Each month, Tarleton Quidditch holds fundraisers for different charities. 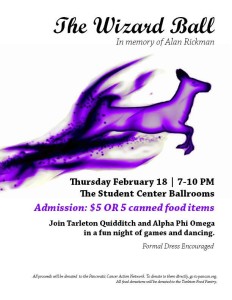 Bertie Gardner, President of the Tarleton Quidditch Association, said, “Tarleton Quidditch usually raises funds through bake sales and selling club shirts… We typically do a ‘charity of the month’ and organize a campaign around it.” Gardner said that, so far, the group has raised over $400 total “that has been dispersed among Reach Out and Read, the Rape Abuse Incest National Network, the Crisis Text Hotline, Cooks Children’s Hospital and Be the Match (Blood Marrow Registry).”

This month, they have chosen the Pancreatic Cancer Action Network as the beneficiary of the funds they raise.

The Wizard Ball will be dedicated to Rickman, who played Severus Snape in the Harry Potter film series. Rickman died on Jan. 14 from pancreatic cancer.

Tarleton Quidditch will be co-hosting the Wizard Ball with Alpha Phi Omega, who hosted a Harry Potter themed rush in the fall of 2015.

“The Wizard Ball will have dancing, small games and a photo booth. There will be a booth (for participants) to be insulted by our Snape impersonator for a quarter, a target practice game involving Umbridge and we are tentatively planning Quidditch Pong. The photo booth will have Harry Potter themed props. We’re aiming to raise $500 for the Pancreatic Cancer Action Network,” said Gardner.

“One (giveway) is a raffle in which attendants are entered when purchasing a ticket. The winner will win a Sorting Hat. The second giveaway is a social media photo contest that you can enter by posting a photo of yourself in wizard wear on Twitter or Instagram and using the hashtag ‘WizardBall.’ The winner will win a replica Quaffle from the movies,” said Gardner.

The Wizard Ball will take place in the Barry B. Thompson Student Center on Feb. 18 from 7 p.m. to 10 p.m. Tickets are $5 per person at the door, or they are also accepting five canned goods for admittance. All canned goods will be donated to the Tarleton Food Pantry. Formal dress is encouraged and “wizard wear” is also accepted.