Though the town of Stephenville is likely better known for its country music scene, there is still a place for the indie rock genre. The Raw Feed radio show produced by Tom Peterson, Frank Dayton, Sam “the intern” Burnett, and Stephen Stokes, the actual intern, is that place.

Raw Feed Radio began about eight years ago as an online streaming show, but the show as it is now, with these four, started in January of 2013.

“It started with us just wanting to play music that we didn’t think was getting enough attention in the area,” Dayton said. 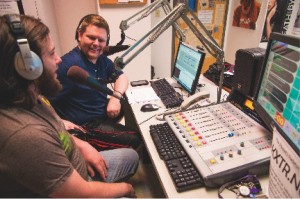 Their audience is much more than just the Stephenville area. Due to the array of bands they interview, their ability to live stream online and Dayton’s previous Southern California residence, the show is listened to by people all over the nation. They consistently have interviews with bands big and small on their show such as Churches, The Neighborhood, Hawthorne Heights, Circa Survive and The Used.

Along with interviews, they host contests and giveaways for their listeners. They also host a battle of the unsigned bands contest for any band located around the country to submit one track to be played on air and voted on as the victor of the contest. It publicizes the show and helps small bands get their name out there.

As a team, they have been personally invited to individual shows and events like Warped Tour, South by Southwest, Trees and The House of Blues.

“I like the single show interviews [more] because you’re there to see one to two bands, you do the interview and then enjoy the show,” Peterson said.

They may just be on a small town radio station for now, but they have aspirations to make this a career and “to host a concert as Raw Feed Radio” as Peterson said.

As much as these guys seem like the real deal and put a lot of time into making their show successful, they still have their day jobs.

“We all have at one point or currently still work at Staples,” Dayton said.