Ready for the challenge: TexAnn volleyball gears up for new season

After a historic 24-8 season in 2014 for the TexAnns, head coach Mary Shindler and the rest of the volleyball team are ready to carry the momentum into this season.

In the Lone Star Conference preseason polls, the TexAnns were picked to finish second.

“It’s exciting, but I don’t know that I’ve thought about it since the day [preseason polls] came out,” said Schindler. “I’m sure the girls have, and, yes, I want them to be excited about it, because they earned it. At the same time, were they picked first? No. It’s a matter of how you finish anyway.”

”We were so successful last year, and I’m excited to see how we do with so many new girls this year,” said sophomore outside hitter Hailey Roberts. “With all the girls returning from last season, I feel like it’s the perfect team this year.” 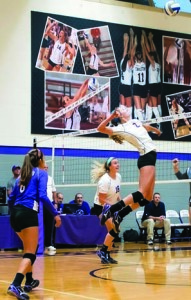 The TexAnns are looking to build as a team this year with new players and a new assistant coach, Ashlee Hilbun. Hilbun was hired after volleyball assistant coach Jessie Ramirez resigned over the summer after her first season with the TexAnns. Schindler said she is excited to have Hilbun on the team and says she will bring a lot of experience.

“She’s a great player. She’s fun to have in the gym as far as scrimmaging and challenging some of those girls,” said Schindler. “It’s nice to have someone with a calming personality. I’m very intense, so it’s great to have this combination with somebody who is going to see the game in a different perspective. She’s a great fit and we’re lucky to have her on our team.”

Although Roberts was excited to have earned the preseason pick for Offensive Player of the Year, she said, “It’s just a pick. I have to look past that, and I really have to focus on the season and how we do as a team. I can’t let it go to my head.”

Roberts said that she loves the pressure and uses the title as motivation.

Schindler said the main things the team is working on this year are consistency, ball control, and terminating early.

The TexAnns took first place in the 2014 Lone Star Conference Tournament, after defeating the top seed West Texas A&M in five sets in the semifinals. The TexAnns then went on to defeat San Angelo State University in five sets in the final round of the tournament, claiming the title of the Lone Star Conference Champions for the first time in Tarleton history, receiving an automatic bid to the South Central regional tournament as the No. 6 seed.

The TexAnns started off hot in the South Central regional tournament, sweeping No. 3 seed Metro State in the first round. It wasn’t until the match between the TexAnns and the Lions of University of Arkansas-Fort Smith that brought Tarleton’s historic season to an end. Despite the 4-1 loss, the TexAnns still made history after making their first ever NCAA tournament appearance and claiming their first win in an NCAA regional game.