The semester is beginning with a trial run of extending hours of operation in the Recreational Sports Facility.

During Student Government Association meetings last semester, members of the House discussed that an additional hour would be beneficial to students that were too busy to go to the Rec Center during the day. Since that time, Rec Sports has decided to extend their hours by an additional hour each night during the first week of this spring semester so that the Rec Center will close at midnight. 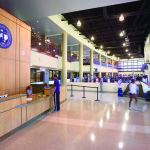 The Rec Center has a number of ways for the Tarleton community to stay physically fit.<br><i>
(Photo courtesy of Tarleton.edu)</i>

Though this is only a week-long trial, long-term effects may occur.

“The 11 p.m. to midnight swipes will be evaluated and a decision will be made about staying open an hour later Sunday through Thursday nights,” said Rec Sports Director Robert Nimmo.

For this probationary period to be considered successful, Rec members would need to utilize this extra hour with a total count of 25-50 swipes each night, Nimmo added.

If the additional hour proves to be successful, changes will go into effect this fall.