Saturday afternoon the TexAnns clinched a four-set win and added on to their winning streak, making it a season-high eight game streak. Hailey Roberts, sitting out from her ankle injury from the night before cheered on her teammates during a brutal head to head match against Midwestern State University.

In the opening set, Tarleton State University fought hard against Midwestern State but still found themselves falling behind on the scoreboard. The Mustangs put up a fight and snuck in a 25-22 victory in the first set, but the TexAnns were not even close to giving up. 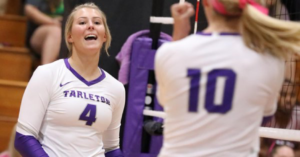 The second set had the same back-and-forth gameplay until Adriana Darthuy broke the 7-7 tie by landing a kill that opened a set-clinching run for Tarleton. The TexAnns hit the ground running and racked up the points as Jordyn Keamo landed two aces along with consecutive serves. Darthuy then finished the set with a final five points and delivered a 25-9 victory for the TexAnns.

As the stands roared with cheering fans, the TexAnns entered the third set strong. Tied 6-6, they stayed on their toes until the Mustangs experienced a service error, giving Tarleton the green light to take the lead. Tarleton ran the score up towards the end with Midwestern State trailing by four until an attack error from the Mustangs sealed the set as Tarleton took their second win 25-19.

A neck-and-neck final set helped the TexAnns stay on guard as they worked together to break the 13-13 knot. Amber Strange started the match-clinching 12-2 run for the TexAnns and a Mustang error ended the match in Tarleton’s favor. The TexAnns clinched the final set 25-15 and won the game.

Strange aided in six of the final 10 points of the game and Darthuy led the game in a total number of 16 kills, four aces and three successful blocks.

The TexAnns will be on the road to New Mexico next weekend as they face off against Eastern New Mexico on Friday at 7 p.m.