Mineral Wells police were involved in a high-speed chase Tuesday afternoon that looped through more than 22 blocks of residential areas in the southeast side of town, before eventually ending in an arrest.

Mineral Wells Police Department reported an officer, parked next to “Plastic Park” in the 400 block of S.E. 15th Street, saw a tan, extended-cab Chevrolet truck speed past and run through the stop sign at the intersection with S.E. 4th Avenue. The officer drove off to pursue the truck and when he came close, the officer reported he thought he saw the driver doing donuts in the bar ditch on 15th between 4th and 6th Avenue.

Inspection of the tire tracks at the scene suggest the driver – later identified as Justin P. Simmons, 24 – merely lost control on the sharp curve in the road and kicked up dust trying to straighten up in the bar ditch. Simmons continued to speed along S.E. 15th Street, driving down a sharp dip when the road merged into S.E. 16th, with the officer in hot pursuit. 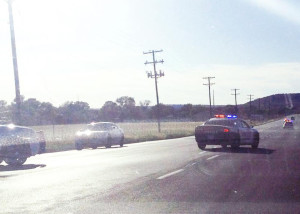 After stopping on S.E. Martin Luther King Jr. Street, a motorist took this photograph, through the windshield, of Tuesday evening’s high-speed chase. The pursuit ended shortly afterwards, when police arrested the driver, Justin P. Simmons, 24. This photographer said the driver took this turn so fast his truck was riding on “two wheels” as it passed by.
(Photo courtesy of Mineral Wells Index)

Police said Simmons continued on 16th Street, through residential areas, before turning right onto S.E. 23rd Avenue. At the dead-end on 23rd, Simmons swung right again onto S.E. 21st Street and then tore into an alley between S.E. 22nd and S.E. 21st avenues. Simmons narrowly missed one backyard fence and dodged gas meters down the small corridor, according to tire tracks left behind in the grass.

The pursuing officer tried to follow closely, but lost Simmons when he sped around an outlet from the alley onto S.E. 19th Street, according the a MWPD spokesperson.

From this point, it is unclear where Simmons went immediately following the end of this first pursuit. But, eyewitnesses reported they saw his truck shortly before 6 p.m. take a sharp turn from S.E. 12th Street and speed south on S.E. 24th Avenue, with two MWPD patrol cars and a Palo Pinto County Sheriff’s deputy following in pursuit, sirens blaring.

After making Martin Luther King Jr. his own personal Autobahn, Simmons continued to push the limits of his Chevy truck and the officers chasing him. He took a hard left, heading south down S.E. 2nd Avenue and continued to sprint through neighborhoods, which included negotiating “The Circle,” before his truck broke down, near where the chase began in the 1600 block of S.E. 2nd Avenue.

Back at square one, police arrested Simmons for evading arrest with a vehicle, among other charges, and took him into custody. After spending the night in the city jail, he was booked into Palo Pinto County Jail Wednesday afternoon.

Police said they are unsure why Simmons sped off in the first place, as he had no outstanding warrants.

Regardless, while Simmons took his trek down his version of Southeast Mineral Wells Motor Speedway, eyewitness reports indicate he put many pedestrians and drivers in danger on what was a nice, cool evening when many were enjoying the outdoors or heading home.

The Dublin Police Department is on a man hunt and is asking for residents’ help.

“We’re searching for Claud T. Taylor, Jr.,” said Officer Benny Noel. “At approximately 11:30 p.m. on Sept. 25, Taylor cut his ankle monitor off and ran from police. While he is not considered dangerous, Taylor has a lengthy arrest history and is now wanted for a parole violation.”

According to police officials, Officer Melinda Spence, who was dispatched to the initial call when the monitor notified police officials of Taylor’s escape, was able to recover the monitor. It is being held by Dublin Police Department as evidence.

Dublin Chief Shawn Fullagar said his officers performed a search for Taylor at three locations throughout Dublin Wednesday morning, however Taylor was not located. Noel and Fullagar both said they believe Taylor is still in the area.

Taylor is a 33-year-old, Hispanic male. He is 5’6″ and has brown eyes and black hair. Officials estimate he weighs 135-140 pounds. Noel said Taylor has a number of scars and tattoos, most notably the tattoo on the left side of his neck which contains some lettering.

“We are in communication with his family and some other people he’s talking to in the area and we do believe he is still in Erath County,” Noel said. “Everyone has been cooperating with our investigation and it’s really only a matter of time until we have him in custody.”

A 15-year-old girl reported missing early Thursday morning has been found “safe and well,” Sheriff Roger Deeds said. Emergency alerts went out at 2:50 a.m. about the missing girl, last seen in the Harbor Lakes area, according to reports. The girl was found about an hour later, Deeds said.

Jacob Elden Carter, 23, of the 3600 block of Oak Meadow Street in the Oak Trail Shores subdivision, was arrested Oct. 2 by a Granbury police officer and on a bond violation in connection with a felony charge of possession of a controlled substance, Penalty Group 2, less than 1 gram, Hood County Jail booking records show.