Stephenville is known for its hospitality, easy-going lifestyle and putting together more fun stuff, most of it free, than you can shake a stick at.

Not the least of those freebies is the annual, day-long By Gone Days on the Bosque celebration. It’s always open to the public with no admission and boasts a wide variety of “how things used to be” activities, exhibits, performances and good food. 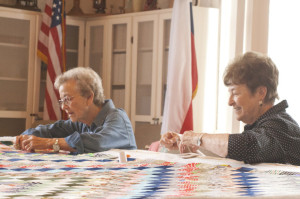 From Civil War reenactments to blacksmith displays and arts and crafts for visitors of all ages, By Gone Days taught fun lessons in history to hundreds of patrons in downtown Stephenville Saturday.
(Courtesy photo by Jessie Horton, Stephenville Empire-Tribune)

On Saturday, renewal of this fun fair was held on the museum grounds and there was no shortage of interesting things to see and do. Just prior to opening the festivities, Robin H. Richie, president of the board of directors and By Gone Days on the Bosque chair said, “Over the course of the day we’ll usually see at least a thousand people, if not two or even three thousand before it’s all over.”

Perennial favorites are the gun slinging reenactments throughout the day by the By Gone Days Gunfighters. Dressed in perfect period-piece garb right down to the boots, spurs, knives, guns and hats, these ferocious cowboys put on four black powder shoot-out shows.

Riding herd on the group is Ken Ritchie, whose handle is “Marshall Ken.” He explained that the group consists almost entirely of war veterans, their spouses, children and other supporters.

Robin Ritchie added, “ Post-Traumatic Stress Disorder (or PTSD) is a common disability among other service-related ailments. Forming the By Gone Day Gunfighters has been a great way to spend a day together talking about old times and having a little fun in the process.”

Marshal Ken, who is a Vietnam combat vet himself, pointed out that the group is available to perform at no charge, not only at the annual museum event but also for groups such as charities and Boy Scouts. He added that they take the authenticity of their look and shows very seriously. “These guys spend anywhere from $1,500 to $5,000 on their clothes, boots, hats and weapons of choice, so you can see how committed to it they are.”

The United Daughters of the Confederacy, or UDC, set up a unique booth at the event to search online genealogical databases on behalf of anybody who stopped by who was interested in finding ancestors who may have lived or fought during the Civil War.

Another exciting demonstration was conducted by the Sons of Confederate Veterans, Camp 1904, who live-fired both muskets and a cannon from the Civil War era. The cannon used for the demonstration is a genuine, working weapon − an 1841 Light Field artillery piece that was used by both Union and Confederate forces.

Gunner and second in command, Ron Jennings said, “It has an accurate range of up to two miles and was a deadly weapon that inflicted heavy casualties on the soldiers on both sides, firing both cannon balls and shot.”

Open house tours and peek viewing of various cabins on the grounds were held as well. The Berry House is the only structure original to the museum grounds, and the public was able to have an intimate look at the John Tarleton Ranch House, one of the museum’s oldest buildings, as well as the Carmack Cabin and the Cowan Cabin. Both the fragile log cabins were built by early Cross Timbers area settlers.

Pecan Corner Printing Press History talks and demonstrations were held at various times throughout the day. In addition, over 40 vendors participated in old-time arts and crafts displays and exhibits, Dutch-oven cooking by the Boy Scouts of Troop 18 and Cub Scout Pack 18, gourd decorating, blacksmithing and much more.
—

Wednesday was the department’s busiest day. According to MW Fire/Emergency Medical Services, MWFD and MWVFD responded to three total calls that day.

Not long after, just before 2 p.m., MWFD responded to a person locked in an elevator in the 100 block of SE 6th Avenue. An electrician was on the scene and was able to successfully open the elevator door and release the person inside. The elevator was then placed out of service.

MWVFD got in on the Wednesday action when they took a truck to aid the Graford Volunteer Fire Department in fighting a tractor fire on Grassyridge Road around 1:30 p.m. The fire was successfully extinguished with no problems.

Rounding out a week of local emergencies was a truck fire just before 1:30 a.m. Friday morning. MWFD responded to the 600 block of NW 8th Street to find a small fire coming from underneath a truck near the exhaust. The fire was quickly extinguished with no damage found from the fire and no injuries.

Two persons are willing to donate $300,000 if Mission Granbury can raise matching funds by the end of this year to buy an almost 10,000 square-foot-building, board president Lance Terry said. It would enable Mission Granbury to expand operations to assist those in crises and need.