A few Glen Rose business owners are defending their right to attract customers. The issue of temporary signage was taken before the city council at its Monday, Oct. 14 meeting, when Code Enforcement Officer Ray Moody presented several revisions to the existing sign ordinance.

The issue was spurred when two businesses were contacted by Moody about ordinance violations. Torie White, who owns and operates Tan Tyme, and T.J. Sims, owner of Happy Hippo, were both present at the meeting. Representatives of a third business – Riki and Melissa Braswell, who own Spare Time – were also in attendance.

Opening the discussion, Mayor Dennis Moore said the objective was to make the existing ordinance, which has been on the books since 2004, “more business friendly.” 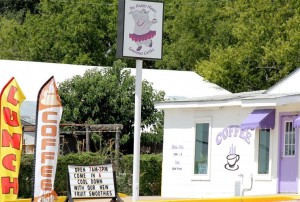 Moody said current regulations are “too restrictive,” banning temporary signs for anything other than the promotion of special events.

“Banners are strictly prohibited by the current ordinance,” Moody said.

The proposed revisions would allow businesses to utilize temporary signs for a 30-day period four times annually, for a total of four months.

Addressing the council, White – who currently has four banners that measure 12-feet tall and two-feet wide – pointed out that the proposed ordinance would only allow her to have two banners. She also said she could not afford to only promote services a few times a year.

“I spent several hundred dollars on my banners,” she said. “That is a lot of money for a small business owner. I need business year-round. I have services that are offered year-round.”

Riki Braswell agreed. Spare Time has a marquee that is used to promote special products and services throughout the year and also uses balloons to catch customers’ attention.

“We only close for two weeks every year,” he said.

“They need to be traded out or replaced,” Ramsay said.

Sims, who utilizes banners and a marquee outside of her business, agreed. But Sims said she found 22 businesses across the city using temporary signs. She said most of them had not been contacted about the ordinance violation.

“There are some that look terrible,” Sims said, adding promotional signs work for her business. “They have increased my lunch traffic.”

Sims said she needs the business boosters 12 months out of the year, not four.

“I don’t agree with that either,” council member Johnny Martin said, referring to the four month limit. “I would like to see us talk about that some more.”

Moody explained that allowing them throughout the year would make the signs “permanent” and not promotional. Furthermore, movable, changeable temporary signs do not conform with permanent signage requirements.

According to the proposed ordinance, the size of the temporary promotional devices – single or multiple signs at each business – could not exceed 50 square feet, and each permit would only allow a maximum of five signs. The proposed ordinance allows new businesses to display a temporary sign for up to 90 days, and that period would not count against the four allowed during the calendar year.

Moody said the ordinance would also allow for certain inflatable signs and balloons, which are currently prohibited.

“We have businesses that struggle,” council member Chris Bryant said. “I cannot see charging a fee. I can understand getting a permit so we know what is going up, but with taxes increasing and everything else, I cannot see more fees.”

Moody said he had reduced the permit fee by about 80 percent, and it would help cover enforcement-related costs, including the mileage and time incurred verifying permits and production of associated forms.

Finally, Moody, who has been criticized by some community members, was praised for his efforts to enforce city codes and revise outdated regulations. Bryant asked citizens and business owners to not take their frustration out on ‘The Code Dude.’

“He is not the enemy,” Bryant said. “This is an improvement. We will find a resolution that benefits everyone.”

Moody, who writes a regular column for the Reporter, entitled “The Code Dude,” was asked to present revisions to the proposed ordinance at the council’s November meeting.

Mineral Wells Police Department dispatch announced that a motorist called in the rollover after seeing it happen in his or her rearview mirror.

According to a medic at the scene, the 48-year-old driver “got sleepy” while she was driving and veered her black Toyota FJ Cruiser off the road into the steep bar ditch, where her vehicle struck a tree and rolled. She was alone in the car.

After well over an hour in closed session Monday night to evaluate Superintendent Dr. Rodney Schneider, the Dublin ISD board of trustees returned to open session without saying a word about the evaluation.

But they had plenty to say about student accomplishments.

During the report agenda, the board heard from Lisa Weaver, who is heading up the D.O.G.S. (Dads Of Great Students) mentoring program. She reported that the intermediate school campus was the first DISD campus to host the program, but if it is successful, she will incorporate it into other campuses as well.

“The way the program works is we take men from our community who’ve completed a full background check, and we let them spend a day on campus with the students, just being a positive male role model in their lives,” Weaver said. “We’ve already had a number of guys sign up, and the coolest part is that many of them are retired. So these kids, who may not have a chance to be around their own grandfathers, are getting that influence in their lives as well.”

Another report given during the report agenda was a district health and wellness program that was budgeted for the first time this year. Schneider said there are a number of ways to utilize these funds, but none have been decided on by the committee formed to organize the program.

“We formed this committee and developed this program to promote health and wellness in our district, among our teachers and faculty and encourage them to be more healthy,” Schneider said. “Some of the research done by the committee shows, as everyone already knows, that an increase in exercise will decrease the number of absences a person has. Absences are something we are looking at very closely now. I asked the committee to bring us ideas to help with this and one of their first recommendations is to supplement the membership fee for Titan Fitness.”

Schneider said the business manager has agreed to offer a special rate for teachers. The committee is recommending the board pay $100 of the $185 membership fee. Some members of the board seemed skeptical about the idea, with one member, Sue Lewis, saying she is opposed to the plan. No board action was taken.

As part of National School Bus Safety Week through Friday, the DPS is urging drivers to obey state laws by not passing any school bus that is stopped and operating a visual signal – either flashing red lights or a stop sign. Troopers will be riding Granbury Independent School District buses as well as following school buses to help enforce the safety laws.