Mineral Wells is gearing up for this year’s edition of the Crazy Water Festival, celebrating 134 years of the crazy mineral water that is such a vital part of the city’s history.

The Mineral Wells Chamber of Commerce will serve as the main sponsor of the 2013 festival, which is set for two days this year – Friday and Saturday, Oct. 11 and 12 – in the home of Crazy Water, Mineral Wells. 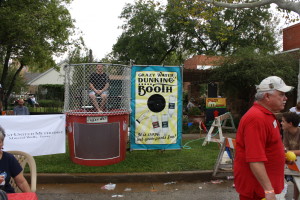 The “Crazy Water Dunking Booth” is one of many attractions at the Crazy Water Festival.
(Landon Haston, Texan News Service)

Festival Chair and co-owner of Famous Water, Carol Elder, said the family aspect of the festival is a big part of what makes it so great.

The festival kicks off Friday night with the Crazy Car Cruise – a parade through town of some of the finest classic and custom-built cars in the area. After the cruise, there will be a concert at the historic outdoor amphitheater behind the Little Rock Schoolhouse – the first-ever public school building in Mineral Wells.

But the festival’s biggest day is Saturday, which begins with the Crazy 5K Run, followed by the official festival opening at 9 a.m. on the festival’s main grounds adjacent to the Famous Mineral Water Company at 209 N.W. 6th Street.

In addition to a large array of vendors and activities for all ages, the festival itself will feature sidewalk chalk art created by around 60 regional artists – which will benefit the Disaster Relief Team of Palo Pinto County – and live music from a plethora of groups including 50 Thick, Kevin Rowe and the Prodigal Sons and Adam Hull and the Handsome Half Breeds, among others. The festival will also boast the Crazy Dunking Booth and the return of Crazy Water Rahr Beer in the Beer Garden.

Last year’s festival put around $27,000 back into the community: a number that Elder hopes to surpass this year.

“Every year that amount increase,” she said. “We hope to break that this year.”

Former Mineral Wells Chamber of Commerce Executive Director Beth Watson said the festival should have a significant positive impact on the local economy.

“The Crazy Water Festival generates substantial economic activity from both tourists and locals as they prepare for the festival,” she said. “About 9,500 people attended last year, with an estimated 25 to 30 percent from out of the area. It also fills dozens of hotel rooms, so you are talking about a substantial impact for a weekend event. The chamber could not be prouder to sponsor the festival and acknowledges the leadership of Carol Elder in making it a success.”

Admission to the festival is $3, with $1 off per canned food item donated to support local food banks.

A local man is on the mend following a two-vehicle collision Monday, Oct. 7.

John Dee Williams, who was thrown from his motorcycle when the accident occurred, underwent surgery Tuesday, according to the family.

“There is a long recovery ahead for him,” Sherri Williams posted on Facebook.

Williams reportedly sustained injuries to his hip, knee, leg and face, while he did not sustain head trauma.

Glen Rose Police Chief Buck Martin said Williams was driving his motorcycle southwest on Barnard Street and had just gone through the intersection at State Highway 144 – on the downtown square – at about 2:45 p.m. when the collision with a 2007 Toyota pickup occurred.

“It appears they both attempted to go at the same time,” Martin said.

Martin said Thomas was issued a citation for failure to yield right-of-way since Williams’s vehicle was in the middle of the intersection when police arrived on the scene. The location of the vehicles led him to believe Williams had left the intersection first.

Williams works as a mechanic at Spike’s Automotive, operated by his brother, Spike Williams. And Sherri Williams said he would have to remain off of his feet for about three months.

In an effort to assist the victim, a donation collection jar has been set up at Tiger Corner Exxon in Glen Rose, located at 1110 N.E. Big Bend Trail.

Gilmer remains atop the poll for the second straight week, followed by Argyle and Kilgore. Gilmer and Argyle each project to take the Division II route through the playoffs, while Kilgore is the highest-ranked team expected to join Stephenville in the Division I bracket.

Gilmer and Kilgore are each in District 16-3A, the only district with two state ranked teams.

District play begins statewide this week, with smaller five-team districts just getting started. Stephenville begins defense of its 7-3A title at 7:30 p.m. Friday at Glen Rose.

Hico is not state-ranked, but the Tigers (6-0), who remain undefeated, continue to receive votes in the AP poll, including five votes again this week. They visit Goldthwaite in their District 5-A Division I opener on Friday.

Christmas in October presentation on Friday

Toys used as table decorations for the Christmas in October program will be given as Christmas gifts to children at the Ada Carey Center for abused women and children.

Granbury PD: One sustains minor injury in fight at GHS

Granbury Police Department Deputy Chief Alan Hines said that a fight Tuesday morning at Granbury High School between two students resulted in a possible minor nose injury, but additional details on the altercation are not yet available.

Hines noted that no charges are expected to be filed in connection with the incident.