Lonn Reisman is stepping down as the university’s head men’s basketball coach and will be replaced by his son, Chris Reisman, President Dominic Dottavio announced Friday at a press conference.

“We did not have to look hard for a new men’s basketball head coach,” said Dottavio. “He was already on the team. Chris Reisman is a dyed-in-purple Texan. He played Texan basketball as a student and has set NCAA Division II records as Tarleton men’s assistant and associate head coach. This is a momentous day for Tarleton and well-deserved recognition for all Chris has contributed to the program over the past 17 years.” 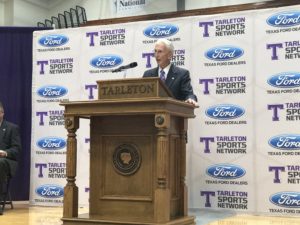 Reisman, who will continue on as athletic director, arrived at Tarleton in 1988 and completed his 30th season with the university while leading teams to 21 winning seasons and 19 championship games in the Lone Star Conference.

“I’m a little bit numb,” the elder Reisman said. “To be honest, I’ve seen the greatest moments of my life on this floor, winning regional and conference championships. The most important thing is having been through 30 teams of players that all spent their time giving me their heart and soul on this floor. To say goodbye to it is numbing, but I know this is the right decision because I’ve been doing this for a long time. Being a dual athletic director and head basketball coach, there’s not many left of us in this nation, and I need to direct my attention to being full-time athletic director.”

“Everybody thinks you plan this, but you don’t,” he said. “In the last month, that day came, and I knew when I was driving to work, and I knew as I sat down in my office, it was time. It’s a feeling that comes over you and stays with you and you know it’s time to do what you need to.” 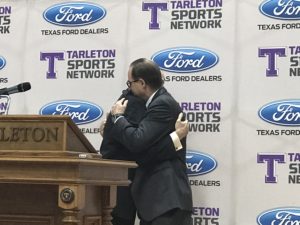 Lonn seemed confident in his son’s abilities to lead a team to a national championship.

“I hope to see Chris stay right where we are right now,” Lonn Reisman said. “We’ve been to the Final Four. We’ve been to more Elite Eights than anybody in the LSC. We’ve been to Sweet 16’s, the NCAA tournament 14 out of 17 years. But we’ve missed one little thing –can we win a national championship? I hope that is what’s driving him to get to that last piece of the puzzle… He’s been beside me on that bench as a player and a coach for 21 years. He knows the responsibility of where this program is prestigiously in the nation, and I can’t think of a better fit to a person that’s been loyal to this university.”

Chris Reisman helped direct a 414-124 record in his first 17 years on the coaching staff and hopes to carry on his father’s traditions. 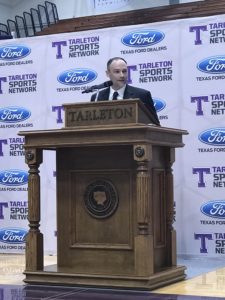 Chris Reisman giving an acceptance speech over seizing the title of head men’s basketball coach after his father. Photo by Lorynne Benavides

“I think it’s about carrying on the tradition and history that Coach Reisman brought for us every year,” said Chris Reisman. “We want to make the national tournament and want to be a competition for the Lone Star Conference Championship, and I don’t think the expectations are going to change much. I’ve been here for a long time and I’m excited to hit the ground running. I don’t know if you can replace a legend like Coach Lonn Reisman, but at the same time, he’s helped build me into a man and coach I think is prepared to take on this tremendous task. The one great thing is he’s not leaving the building. He’s still going to provide a lot of advice for me and my staff. We understand what a huge task it is to fill a huge guy like Coach Reisman’s shoes.”

As a Stephenville High School graduate and 2001 Tarleton alum, Chris looks forward to serving the Tarleton community in a different way.

“I’m looking forward to giving back,” he said. “I feel like I’ve been giving back in (a) smaller role, but now I’m going to be able to give back in a larger role, and I couldn’t be more excited to represent the greatest institution in the state at Tarleton State University.”