Troyal Yosko died on March 1, 2017. He graduated from Tarleton State University in 2016. Troyal was also a pitcher for Tarleton’s baseball team throughout all four years of college. 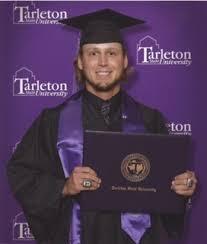 Yosko graduated in May 2016 with his bachelor’s degree in computer science. Photo coutresy of the Yosko family

Troyal’s mother, Sandi Yosko said some of her favorite memories of Troyal were when he was playing baseball, especially at Tarleton.

“Coming in as a freshman, you don’t think you’re going to get to play and then he got to be a starting pitcher his freshman year, so that was humbling,” she said. “He loved that game. His heart was in it.”

Troyal’s family is choosing not to publicly disclose what claimed his life. However, his mother says that his death was accidental.

Troyal’s mother decided to incorporate all of this to name her son, Troyal Raymond Yosko. “I love Garth Brooks and I love Troyal, the name. My husband’s name is Raymond, so we put Raymond in the middle like, ‘Troyal Raymond Yosko.’ That’s how we got it.”

Sandi teared up when talking about the impact her son had on other people in his life.

“Once you were his friend, you’re his friend for life. He would do anything for you, he would go the extra mile. He would drive hours to help you if you called him. That kind of a kid, that’s [who] he was.” 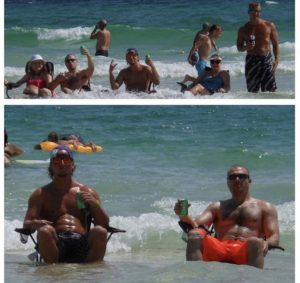 Logan Yosko says one of her favorite memories was when Troyal suggested the family sit in the sandbar on a Florida beach. Photo courtesy of the Yosko family

Sandi and Logan both describe Troyal as an adventurous person.

Logan said one of her favorite memories of her brother was when they were at a beach in Florida on vacation. Troyal noticed the sandbar in the ocean, and encouraged his family to bring their chairs to the sandbar so they could sit in the ocean, while facing everyone else on the beach.

“He was like, ‘This is a good place to put a chair!’ So he goes back and he grabs a chair, and he sets it on the sand bar,” she said. “And we all… lined up chairs and we all turn and face everyone drinking whatever we had. He was so excited about it.”

Troyal was a huge fan of the “Star Wars” and “Harry Potter” movies. “He loved Star Wars. He has all the swords, and all that kind of stuff,” said Sandi.

He was also a fan of the “Pokemon Go” and “Mass Effect” games. “He loved Pokemon Go. He loved that, he loved playing video games,” said Sandi.

In remembrance of her brother, Logan wears a dog tag necklace that has the “N7” logo from the “Mass Effect” video games.

A few months after graduating from Tarleton, Troyal went to Virginia to work for Revature, a technology talent development company. Sandi said he was very excited about this new chapter in his life.

“What they do is, it’s an extension of your computer training and they teach you intense Java—how to code and everything. And, it’s a 12-week training program,” explained Sandi. She added that after training and certification, newly trained employees at Revature are hired by clients who contract them.

Earlier this spring, Troyal left Revature and was being interviewed for new jobs near his hometown in Spring, Texas. Troyal was home for less than three weeks when he died.

On March 2, the day after Troyal died, Logan created a GoFundMe account to pay for Troyal’s funeral expenses.

Logan said that she was “overwhelmed with gratitude.”

About a year from now is when Logan says the family will most likely publicly disclose how Troyal died. When they do, they plan to start a campaign.

“It’s something where everyone needs to know about it, and it can impact a lot of people’s lives and it just needs to go around to everyone—every mother, every father, every sibling. Everyone needs to know about it so it won’t happen again,” said Logan. “It’s kind of a sensitive subject, so that’s why I’m waiting for them [the rest of the family] to get through the grieving process.” 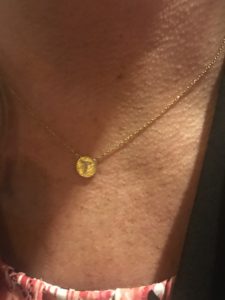 Sandi Yosko wears this ‘T’ necklace to remember the life of her late son. Photo by Quanecia Fraser

“It’s very hard to discuss and talk about, so right now we’re just kind of keeping it within family,” Sandi said. “Eventually it will be out on a platform and we will go national with this.”

Sandi said that it’s “heart wrenching” when she thinks about how Troyal did not live to get married with a family, or have the ability of “taking his kids on vacation and doing all the traditional things that we do at Christmas, [and] all the different holidays.”

“You look at how young Troyal was and just starting out in his life. And just graduating from college,” she explained. “That’s the thing that gets to me as a mother, the most, is the fact that he was just starting his life and he’s gone now.”

“But I think that there’s a purpose for everything and God has a reason, although we don’t know what the reason is,” she added.

The mother described her life as being “forever changed,” after losing her oldest child. “One day you’re good and the next day you’re just down at the bottom.”

Logan said the family has turned to their faith to help them cope with Troyal’s death. “That’s how we coped with it– turning to God instead of turning into anger or sadness,” she explained.

Texan News spoke with others who were close to Troyal.

Matthew Olive and Peter McMahon were two of Troyal’s best friends who also played on the Texan baseball team with him.

Olive explained, “I met him five years ago, probably the second day that we were both on campus as freshman, and we became best friends through baseball. I’d say that he’s one of those guys where he was a true friend, the kind that you may only have a handful of your entire life. And, with baseball we were roommates, so we pretty much just spent the entire college [experience] together, whether we were on the field or just hanging out at the house.” He added, “So, it’s still kind of just, shocking. But, me and my current roommate (McMahon), we were both roommates with him for two years, and not a day goes by where we’re not just sad that he’s gone.”

“Troyal really impacted me since our sophomore year when we first moved in together as roommates. We did pretty much everything together that year since we played baseball and were in the same math classes. He helped me a lot with my physics homework because he was literally a genius. We did everything together that year and the following two years because we lived together for three years,” said McMahon. “Everyone knows him for being different and weird but it’s because of that why everyone loved him. He was extremely funny and always happy. He loved his life and loved everyone in it.”

Bryan Conger, the head baseball coach at Tarleton says, “It’s a tragedy that no family can ever fully comprehend. It’s a very sad situation and our thoughts and prayers are with his family.” 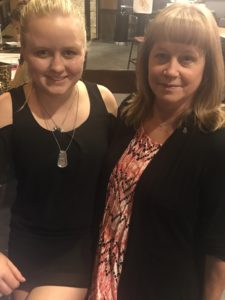 Sandi also said that the Silver Taps ceremony made her feel like she was a part of a bigger family, and also made her realize how many other people have experienced the same pain she is feeling.

“It was beautiful, but it made me sit back and realize how small I am. How much my pain is about, this [small], compared to all those 283 names that were called. How many people were affected just in one year from Tarleton. Imagine every university, all around the world. Then, that makes you feel about, this, big.”