HARTFORD, Conn. — Investigators planned to release a long-awaited report Monday on the Newtown school shooting that could provide some of the first official answers to questions about the history of the gunman and the police response to one of the worst school shootings in history.

The summary report by the lead investigator, State’s Attorney Stephen Sedensky III, comes nearly a year after the massacre of 20 children and six women inside Sandy Hook Elementary School. 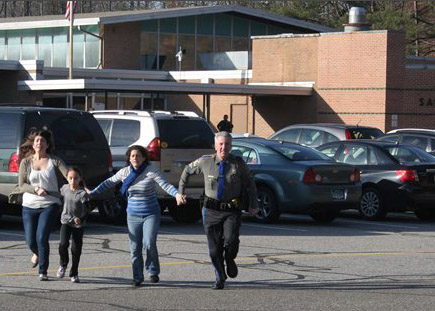 In this Friday, Dec. 14, 2012, file photo provided by the Newtown Bee, a police officer leads two women and a child from Sandy Hook Elementary School in Newtown, Conn., where a gunman opened fire, killing 26 people, including 20 children. A prosecutor is planning to release a report on the investigation into the massacre at Sandy Hook Elementary School on Monday, Nov. 25, 2013, but the public will have to wait longer for the Connecticut state policeís full accounting of the crime.
(AP Photo/Newtown Bee, Shannon Hicks, File) MANDATORY CREDIT: NEWTOWN BEE, SHANNON HICKS

The Dec. 14 shooting plunged the small New England community into mourning, elevated gun safety to the top of the agenda for President Barack Obama and led states across the country to re-evaluate laws on issues including school safety.

The report expected Monday afternoon will not include the full evidence file of Connecticut State Police, which is believed to total thousands of pages. The decision to continue withholding the bulk of the evidence is stirring new criticism of the secrecy surrounding the investigation.

Dan Klau, a Hartford attorney who specializes in First Amendment law, said the decision to release a summary report before the full evidence file is a reversal of standard practice and one of the most unusual elements of the investigation.

“What I found troubling about the approach of the state’s attorney is that from my perspective, he seems to have forgotten his job is to represent the state of Connecticut,” Klau said. “His conduct in many instances has seemed more akin to an attorney in private practice representing Sandy Hook families.”

Twenty-year-old Adam Lanza killed his mother inside their Newtown home before driving to his former elementary school, where he fired off 154 shots with a Bushmaster .223-caliber rifle within five minutes. He killed himself with a handgun as police arrived.

Warrants released in March detailed an arsenal of weapons found inside the Lanza home. But authorities have not provided details on the police response to the shooting, any mental health records for Lanza and whether investigators found any clues to a possible motive for the rampage.

Sedensky has gone to court to fight release of the 911 tapes from the school and resisted calls from Connecticut’s governor to divulge more information sooner.

The withholding of 911 recordings, which are routinely released in other cases, has been the subject of a legal battle between The Associated Press and Sedensky before the state’s Freedom of Information Commission, which ruled in favor of the AP, and now Connecticut’s court system.

New Britain Superior Court Judge Eliot Prescott said Monday he will listen to the 911 recordings from the school before ruling on whether they can be publicly released. He said his ruling would not come Monday.

If the recordings are released, the AP would review the content and determine what, if any, of it would meet the news cooperative’s standards for publication.