Three Tarleton students known as the Ryan Bennett Band are getting the break they’ve been waiting for—they’re playing Friday night for an off-campus audience at the Burleson Relay for Life fundraiser. 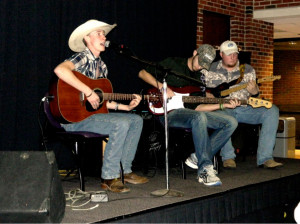 The band’s gig is at Kerr Middle School in Burleson at 7 p.m.

The band, which takes its name from lead singer Ryan Price’s first and middle names, wrote a song for the event to honor and show support for cancer survivors called “Run the Race to Win.”

“We actually had a really, really hard time writing this song,” said Price, 18, of Alvarado. Goldsmith agreed. “When it comes to writing a song, it is much harder to write a song when you are told what topic you are to write, instead of just letting your mind wander,” he said. “It’s like writing an essay for school.”

The band members were inspired by their loved ones who have been affected by cancer.

“I hope that the song will be so inspiring that someone would come up to me after we perform and tell me their story about how it touched them,” says bass player Kenneth Lowery, 19, of Rockwall.

“We want to touch a lot of people with what we do,” Price said. “In the song, it has the big ‘stands before us, cancer free today’ as the final line before the last chorus. It just finishes so strong after that point, because the person in the song survived cancer.”

“I honestly really think that this event is going to give us our big kick,” Price said. “After this gig, we’re going to have to start hitting it hard on recording and playing places.”

The band is working on recording its first single, “Glitter Queen Cowgirl,” and, shooting a music video.