Saturday night at the Lone Star Arena, Stephenville was full of rodeo action. The last collegiate rodeo of the season, Saturday night had eight important gentlemen in the audience who would play a key role in building the rodeo program at Tarleton State. 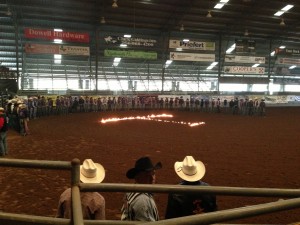 These eight men won the first National Collegiate Men’s Rodeo Championship in the history of the rodeo program in 1967. They are Billy Albin from Comanche, Charles Bitters from Mineral Wells, Johnny Edmonson from Sylvester, Bobby Hungate from Waco, Lionel Lane from Dennis, Randy Magers from Comanche, and Terry Walls from Goldthwait.

Randy Magers said, “The school wouldn’t allow us to wear purple vests to compete in so we picked the colors red and white. We slept in my truck and cleaned up in a water trough before we won the championship.”

Magers still has the red and white vest and also the jacket that the 1967 team wore. He also has the national championship trophy at his home. The team worked hard to win the title with little financial help from the university at the time.

Magers said, “After we won the National Championship we were finally given a scholarship in the form of a hundred dollar bill.”

Since 1967 the Tarleton Rodeo program has grown leaps and bounds and is currently the largest rodeo team in the nation, and is holding the first place spot in the southwest region.

The hall of fame is only in its second year.