ROTC Commander hopes to bring Wainwright Rifles ‘back to life’

Tarleton State University prides itself on its tradition, and the ROTC hopes to soon bring back a tradition that has been left behind.

In the last couple of decades, Tarleton’s drill team, the Wainwright Rifles, has been absent from campus. “My goal is to bring it back to life,” ROTC Commander Lt. Col. Jason Vranes said. 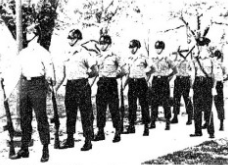 The Wainwright Rifles stand at parade rest during a 1986 performance.
(1986 File Photo by Mary Ann Foreman, The J-TAC)

The Wainwright Rifles, established in 1949, showcased its skills at competitions, Army bases and at the halftime of every home football game. In 1961, Tarleton’s Wainwright Rifles marched in John F. Kennedy’s presidential inauguration parade, according to the Tarleton website.

Vranes said he hopes to bring this forgotten tradition back to life with a new generation of Tarleton students. It will take some funding to restart the program. ROTC is “reaching out for sponsorship” to help pay for uniforms and rifles.

Vranes presented the plan at the junior ROTC drill meet Apr. 20. The return of the Wainwright Rifles is a “great opportunity” for ROTC recruiting. High school drill team students would now have Tarleton as an option.

Bethany Kyle is a freshman journalism and broadcasting major from Bangs, Texas.