Rugby is coming to Tarleton.

Or rather, Tarleton is going to rugby.

Darryl Blair, a senior communications major from Dallas, has been playing football for as long as he can remember. He and his step-brother, William Powell, have enjoyed the sport since Blair was four years old.

Blair says rugby is already here in the states, but mostly at universities and clubs in some cities. “There isn’t a major professional league here like there is in mostly Europe & Australia,” Blair said. “There are some differences between rugby and American football, but not a lot because American football actually originated from rugby. Some people look at rugby as football without the pads, but there’s more to it than just that.”

Blair’s step-brother began playing professional football in 2011 when the Arizona Cardinals signed him as an undrafted free agent from Kansas State. When they called Powell to inform him they had a contract for him, Blair says they had just finished working out together. “I was beyond excited for him, knowing all that he has been through and how hard he worked to get where he is,” Blair said. “I couldn’t think of anyone who deserved the opportunity more than him.”

Last year, Zobel, contacted Powell about possibly playing professional rugby. Powell told him he wanted to stay in the NFL, but that he had someone else in mind.

“William then texted me and told me everything that was going on and asked if he could give Shawn my contact information,” Blair said. “I told him that was fine and we went from there.” 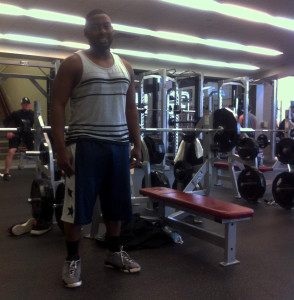 If Blair is offered a contract, he will “have to go to Europe for two or three months and train for the regular season which will be June and July.”

“My hope for the future is to some way turn this opportunity to play rugby into a springboard to playing professional football,” he said. “If that doesn’t work out, I will use my degree to start my sports broadcasting career or possibly even working in an NFL front office or coaching football at the college or high school level.”

But for now, Blair is preparing for what he hopes will be an opportunity to do what he loves best.

“I’m just continuing to work out and trying to keep getting myself into better shape while I wait,” he said. “I’m just praying that the Lord continues to bless me with opportunities and put me in the best situation possible to make it were I want to be.”