Rumors have been cleared about Bender and Ferguson

For the last few years, there were rumors that Bender and Ferguson would be torn down. But with Tarleton’s record-breaking freshmen class, according to Texan Facts, enrollment has grown by 527 students since last fall.

Bobby Waddell, director of residential living and learning (RL&L), said the decision to keep Bender and Ferguson around was based on Tarleton’s number of students living on campus and the need of more housing. The three new residence halls, Honors, Traditions North and Traditions South, weren’t going to support the number of students living on campus.

“It’s impossible to predict numbers… four or five years ago, we (RL&L) didn’t think we would still need Bender and Ferguson along with the three new residence halls that have been put up in the last few years,” Waddell said. “But things have happened since then, such as enrollment rates going up and more importantly, retention rates are at 73 percent from freshmen to sophomores, which is a lot more than we could have predicted.” 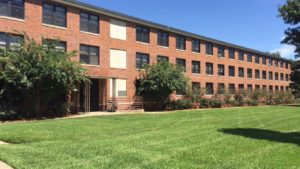 “Bender and Ferguson are very sound facilities and we’d hate to do away with them. They were just in need of some repair and update, so that’s what we’ve done for the residents of Bender and Ferguson,” Waddell said.

Waddell said RL&L have been wanting to turn the bedrooms in Bender and Ferguson to single bedrooms for upper-class students for years before they ever thought about tearing them down.

“If you think about it, these rooms weren’t originally made for today’s student. A majority of our students are moving away from their parents’ house and some have never had to share a bedroom or bathroom, and that’s a difficult transition,” Waddell said.

Waddell said that students who desire to stay engaged and connected to campus have a lot to do with why students are returning to on-campus residential facilities.

“Obviously because of the work our university is doing through our transition programs, through our work with RL&L, students are becoming more engaged on campus; which I believe is one of the big reasons why these students are returning to campus. Therefore, that’s bumping our numbers up more and more.” Waddell added, “it’s a good problem, if you will. We want students to come back and be successful. Our goal is to help students graduate.”