By Angela Charlton and Nataliya Vasilyeva—

SOCHI, Russia (AP) — Cossack militia attacked the Pussy Riot punk group with horsewhips on Wednesday as the artists — who have feuded with Vladmir Putin’s government for years — tried to perform under a sign advertising the Sochi Olympics.

Six group members — five women and one man — donned their signature ski masks and were pulling out a guitar and microphone as at least 10 Cossacks and other security officials moved in. One Cossack appeared to use pepper spray. Another whipped several group members while other Cossacks ripped off their masks and threw the guitar in a garbage can. 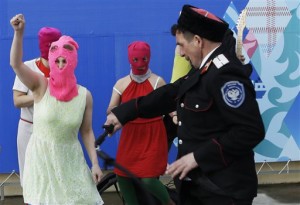 Members of the punk group Pussy Riot, including Nadezhda Tolokonnikova in the blue balaclava and Maria Alekhina in the pink balaclava, are attacked by Cossack militia in Sochi, Russia, on Wednesday, Feb. 19, 2014. The group had gathered in a downtown Sochi restaurant, about 30km (21miles) from where the Winter Olympics are being held. They ran out of the restaurant wearing brightly colored clothes and ski masks and were set upon by about a dozen Cossacks, who are used by police authorities in Russia to patrol the streets.
(AP Photo/Morry Gash)

Police arrived and questioned witnesses, but no one was arrested.

The Cossacks violently pulled masks from women’s heads, beating group member Nadezhda Tolokonnikova with a whip as she lay on the ground.

The incident lasted less than three minutes and one Pussy Riot member, a man wearing a bright yellow tank top, was left with blood on his face, saying he had been pushed to the ground.

Pussy Riot, a performance-art collective involving a loose membership of feminists who edit their actions into music videos, has become an international flashpoint for those who contend Putin’s government has exceeded its authority, particularly restricting human and gay rights.

The group gained international attention in 2012 after barging into Moscow’s main cathedral and performing a “punk prayer” in which they entreated the Virgin Mary to save Russia from Putin, who was on the verge of returning to the Russian presidency for a third term.

Two members of the group, Tolokonnikova and Maria Alekhina, were sentenced to two years in prison, but were released in December under an amnesty bill seen as a Kremlin effort to assuage critics before the Olympics.

Later on Wednesday, Tolokonnikova, Alekhina and two others held another surprise mini-performance in central Sochi, this time next to Olympic rings in front of the City Hall.

Jumping up and down, one playing a plastic guitar, they sang-shouted in Russian: “Putin will teach you how to love the motherland!” A person dressed as one of the Olympic mascots joined them for a moment in an apparent joke.

Police were watching but did not intervene. A few passersby heckled them and yelled at onlookers, saying they should be ashamed to watch.

A few of Pussy Riot’s opponents showed up later, one dressed like a chicken and the others with pieces of paper bearing crude sexual slurs against the band. 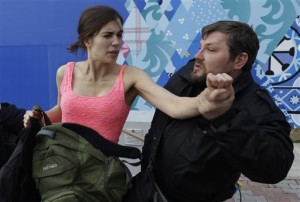 A russian security officer attacks Nadezhda Tolokonnikova and a photographer as she and fellow members of the punk group Pussy Riot, including Maria Alekhina, left, stage a protest performance in Sochi, Russia, on Wednesday, Feb. 19, 2014. The group had gathered in a downtown Sochi restaurant, about 30km (21miles) from where the Winter Olympics are being held. They ran out of the restaurant wearing brightly colored clothes and ski masks and were set upon by about a dozen Cossacks, who are used by police authorities in Russia to patrol the streets.
(AP Photo/Morry Gash)

On Tuesday, Tolokonnikova and Alekhina were briefly detained in Sochi, but not arrested.

The group has called for a boycott of the Sochi Olympics and has insisted that any world leader coming to Sochi would be giving tacit approval of Putin’s policies.

The Cossacks have been used since last year as an auxiliary police force to patrol the streets in the Krasnodar province, which includes the Winter Olympic host city. Patrol leader Igor Gulichev compared his forces to the Texas Rangers, an elite law-enforcement body that has power throughout that state.

Cossacks trace their history in Russia back to the 15th century. Serving in the czarist cavalry, they spearheaded imperial Russia’s expansion and were often used as border guards. Under communism, they virtually disappeared, but have since resurfaced, particularly in the south.