RIYADH, Saudi Arabia — The United States and Saudi Arabia promised each other and the region Monday that they would continue to work together, with Saudi Arabian Foreign Minister Prince Saud al-Faisal saying “our two friendly countries” are busy dealing jointly with troublesome issues like Syria, Iran and the Mideast peace process.

“There is no room for emotion and anger here, but rather for policies of commonsense and level-headedness,” Faisal said at a joint news conference with Kerry.

Nevertheless, U.S. Secretary of State John Kerry arrived for his visit to Saudi Arabia as differences between the two countries intensified over the Obama administration’s policy toward war-torn Syria, its movement toward a possible dialogue with Iran, a regional rival of the Saudis, and its stance on Egypt’s military coup.

Al-Faisal also expressed his deep frustration with the United Nations, where the Saudis recently rejected a seat on the Security Council because of its inability to achieve progress in the Syria or for the Palestinians.

The prince told Kerry: “A true relationship between friends is based on sincerity, candor and frankness, rather than mere courtesy.” The pair appeared together not long after Kerry, speaking to U.S. employees at the American Embassy here, hailed the kingdom’s role as “the senior player” in the Middle East. 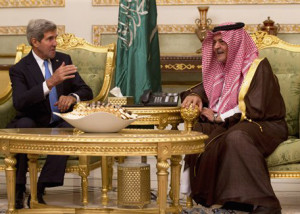 For his part, Kerry said: “this is a deep relationship and it has endured for 75 years and it will endure well into the future.”

Kerry in the past has played down the separate stances as differences in “tactics” rather than in the end goal.

“Right now, we have some very important things to talk about to make certain that the Saudi Arabian-U.S. relationship is on track, moving forward and doing the things that we need to accomplish,” he told the embassy staffers. Kerry listed a number of key areas, including Syria, Egypt and Iran, but also mentioned the Israeli-Palestinian peace process and the broader effort to tamp down “nihilism” that leads to extremist violence.

The Saudis have complained that the United States did not follow through on its threat to punish Syrian President Bashar Assad with military strikes for his government’s use of chemical weapons. Last month, the Saudis won but turned down an elected seat on the U.N. Security Council, saying the body had proved itself largely meaningless because of its inability over two years to address the crisis in Syria.

“We can’t claim to have these high moral values if we do nothing here,” al-Faisal said in reference to Syria..

The prince said Monday that “the kingdom’s declination of membership in the Security Council in no way shape or form amounts to the withdrawing from the United Nations.”

The Saudis also have watched with increasing nervousness as President Barack Obama has approved a cautious opening with their archrival Iran. Al-Faisal also lamented the international organization’s “failure to make the Middle East a nuclear-free zone.”

“This time bomb cannot be defused by only dealing with its ramification or maneuvering around it,” al Faisal said.

At the news conference, Kerry said he shared some of Saudi Arabia’s frustration with the U.N. Security Council, but said he thought it could get better

Eager to soothe the frustration, Kerry was effusive in his praise of the Saudis earlier, noting a slow, but steady domestic transformation with new emphases on education and health. On the move for Saudi women to be allowed to drive, Kerry was careful not to appear to take sides. Noting that while the United States embraces gender equality, “it is up to Saudi Arabia to make its own decisions about its own social structure and choices and the timing of whatever events.”

Kerry, before meeting with Saudi King Abdullah and al-Faisal, reassured the Saudi leaders that the United States considers Saudi Arabia — and not other powers — to be the major force in the region, Kerry said, even above longtime ally Egypt.

“The Saudis are very, very important to all of these things. The Saudis are really the sort of senior player, if you will, in the Arab world, together with Egypt. Egypt is in more of a transition, so Saudi Arabia’s role is that much more important.”

Kerry is in Saudi Arabia on the second leg of a 10-day tour through the Middle East, Europe and North Africa. From Riyadh, he will travel to Poland, Israel, the Palestinian Authority, Jordan, the United Arab Emirates, Algeria and Morocco before returning to Washington.