TRENTON, N.J. (AP) — Gov. Chris Christie was sworn into office Tuesday for a second term, saying he had a mandate to stay the course even as Democrats ramp up criticism of the Republican governor amid investigations of a bridge scandal that has led to other allegations of abuse of power.

“It wasn’t just some of our people who affirmed this course. It was not a vocal plurality like four years ago. No, this time, it was the largest and loudest voice of affirmation that the people of our state have given to any direction in three decades,” Christie said. “We have no moral option but to heed the voice of the voters and that is exactly what I intend to do.” 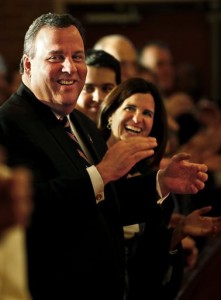 New Jersey Gov. Chris Christie shakes hands as he leaves a prayer service in celebration of his inauguration at the New Hope Baptist Church on Tuesday, Jan. 21, 2014 in Newark. The celebrations to mark the start of Christie’s second term could be tempered by investigations into traffic tie-ups that appear to have been ordered by his staff for political retribution and an allegation that his administration linked Superstorm Sandy aid to approval for a real estate project.
(AP Photo/Rich Schultz)

He also reiterated his call for tax cuts for the middle class.

Unlike in his State of the State speech last week, Christie made no mention of the multiple investigations of his administration.

His speech came less than an hour after Democratic state lawmakers announced they would merge investigative committees from the Assembly and Senate into one panel to look into lane closures on an approach to the George Washington Bridge.

Emails released this month showed a top Christie aide ordered the closure of approach lanes in the town of Fort Lee apparently as political retribution against the mayor there. And new questions have arisen about his use of post-Superstorm Sandy recovery aide.

“We cannot fall victim to the attitude of Washington, D.C.,” he said. “The attitude that puts political wins ahead of policy agreements.”

The 55th governor of New Jersey had to modify the schedule of inaugural events because a severe winter storm threatens to dump up to a foot of snow on the region Tuesday.

His day started with a service at Newark’s New Hope Baptist Church before the swearing-in and address in Trenton.

But organizers canceled an evening party on Ellis Island, a symbolic spot synonymous with the promise of the United States, because there was fear snow would make travel dangerous. The island where some 12 million immigrants first entered the U.S. is divided between New Jersey and New York, but his party was supposed to be held in a hall on the New York side.

Food prepared for the party will instead be donated to food pantries in the Jersey City area.

Lt. Gov. Kim Guadagno, who was drawn into the Sandy aid controversy surrounding Christie last weekend, was also sworn in for her second term.

Christie won re-election in November by a 22-point margin over state Sen. Barbara Buono, a Democrat.

The Republican governor built a national following as a blunt-talking and often funny politician who strived to show that he could find common ground with Democrats on some key issues, including overhauling the state’s public-worker pension program and making it easier to fire teachers who are found to be underperforming.

Christie became a fixture in speculation about who would seek the 2016 presidential nomination with his leadership after Sandy slammed into his state in October 2012.

He worked with President Barack Obama and took on Republican members of Congress who were reluctant to approve aid for storm victims, receiving high marks from his constituents and plentiful national attention, along with criticism from some conservatives.

But his reputation has been battered somewhat since revelations this month that a staffer ordered two of three approach lanes to the George Washington Bridge from Fort Lee shut down for four days in September apparently as political retribution against the mayor there, perhaps for not endorsing Christie for re-election.

The U.S. attorney’s office is investigating separately from the legislative probe.

Christie has apologized, denied any involvement with or knowledge of the plot and fired a deputy chief of staff at the center of the controversy. But questions have continued.

Christie’s administration also faces an allegation from the Democratic mayor of Hoboken that it tied the delivery of Superstorm Sandy aid to the low-lying city of 50,000 across from Manhattan to support for a prime real estate project.

Mayor Dawn Zimmer said she was told by Guadagno that the ultimatum came directly from Christie. Guadagno strongly denied those claims Monday and described them as “false” and “illogical.”

“Any suggestion that Sandy funds were tied to the approval of any project in New Jersey is completely false,” she said.

It is not yet decided whether the legislative investigation will look into Zimmer’s claims.

The $500 tickets to the inaugural celebration and other contributions will be used to help support three charities: Save Ellis Island, The New Hope Baptist Church and New Jersey Heroes, which was founded by first lady Mary Pat Christie.