The March 3 incident that prompted the lockdown was one of 567 calls – mostly minor – that were reported to Stephenville police since Aug. 1, 2015, according to records obtained under the Texas Public Information Act.

For example, of the 567 incidents, 224 were listed as school walk-throughs and business checks.

“We learn who the school employees are and we build relationships with them as well,” he said. “Walkthroughs also help to develop knowledge of the different campuses for our officers as well.”

King said the goal for the high police presence on these school campuses is for the campuses to be safe.

“There is nothing that parents should be worried about,” King said. “The high police presence on Stephenville campuses is all for the welfare of the students and the schools.”

Stephenville ISD Superintendent, Matt Underwood, said, “I think this last lockdown that we had is a prime example of not everything was perfect, but we learned a lot from it and the fact that the police were in quick communication to let the school district know that the danger may not have been imminent, we didn’t take any chances. I think people need to know that we are going to do what’s ethically and morally right regardless of communication or press releases or anything like that.” 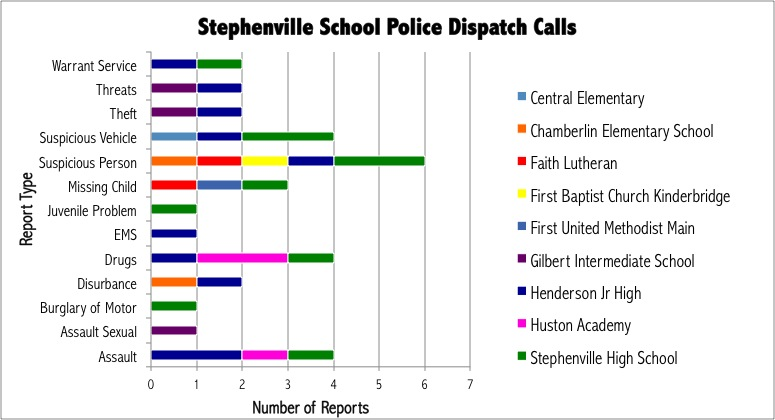 The incident that prompted the lockdown was “originally reported as [having] a gun involved with shots fired,” said King. “It was later determined to be a verbal argument between two males with no weapon fired.”

“The assault was on the child but was by an adult not associated with the school,” he said.  “It was some type of domestic issue.”

Stephenville ISD was informed of the assault and received clarification from the police department about the charges filed and whom they were filed against.

According to the open records and the superintendent, the most common reasons for a major call to campus is drug and alcohol related issues and fighting.

“Drugs and alcohol, yes, those calls do occur,” he said. “But we’ve had actual evidence of drugs and alcohol probably about half of the number of calls that you have [listed in the records].”

Underwood is confident though that Stephenville ISD is a safe place for the children they educate. “I think our incident rates are per capita lower than any other school than I’ve been associated with.”

A source at Stephenville ISD said employees were advised to refer all inquiries regarding this story to administration.

“I feel that my children are completely safe and that the correspondence from the school district [is] good at not causing high alarm by letting us know when needed.”