WASHINGTON (AP) — Two senators unveiled a bipartisan plan Wednesday to raise federal gasoline and diesel taxes for the first time in more than two decades, pitching the proposal as a solution to Congress’ struggle to pay for highway and transit programs. 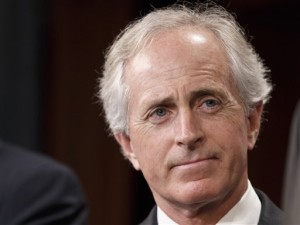 This April 30, 2014 file photo shows Sen. Bob Corker, R-Tenn. on Capitol Hill in Washington. Two senators proposed Wednesday to raise federal gasoline and diesel taxes for the first time in more than two decades as Congress struggles with how to pay for highway and transit programs. Sen. Chris Murphy, a Connecticut Democrat, and Corker, a Tennessee Republican, pitched their plan as a bipartisan solution to replenish the federal Highway Trust Fund. That fund is forecast to go broke in late August.
(AP Photo, File)

The plan offered by Sens. Chris Murphy, D-Conn., and Bob Corker, R-Tenn., would raise the 18.4-cents-a-gallon federal gas tax and 24.4-cents-a- gallon diesel tax by 12 cents each over the next two years, and then index the taxes to keep pace with inflation.The plan also calls for offsetting the tax increases with other taxes cuts. Senators said that could be done by permanently extending six federal tax breaks that expired this year, but they indicated they would be open to other suggestions for offsets.

The federal Highway Trust Fund that pays for highway and transit aid is forecast to go broke by late August. Revenue from gas taxes and other transportation user fees that go into the fund haven’t kept pace with federal aid promised to states. People are driving less per capita and cars are more fuel efficient, keeping revenues fairly flat. But nation’s infrastructure is aging, creating greater demand for new and rebuilt roads and bridges. At the same time, the cost of construction has increased.

“For too long, Congress has shied away from taking serious action to update our country’s aging infrastructure,” Murphy said in a statement. “We’re currently facing a transportation crisis that will only get worse if we don’t take bold action to fund the Highway Trust Fund.”

Since 2008, Congress has repeatedly dipped into the general treasury for money to keep the trust fund solvent, sometimes waiting until the government was the verge of slowing down payments to states. States have complained that the uncertainty over whether federal aid will be forthcoming has limited their ability to commit to larger projects that take years to plan and construct.

“Congress should be embarrassed that it has played chicken with the Highway Trust Fund and allowed it to become one of the largest budgeting failures in the federal government,” Corker said.

The six expired tax breaks identified by the senators as possible offsets for fuel tax increases are a research and development tax credit, certain expensing by small businesses, the state and local sales tax deduction, increasing employer-provided transit benefits to the same level as parking benefits, a deduction for spending by teachers on classroom supplies, and an increased deduction for land conservation and easement donations.