The ballrooms in Tarleton’s student center were full of fun and games Tuesday as the Student Government Association hosted the month’s ChamberMIX in part with the Stephenville Chamber of Commerce. 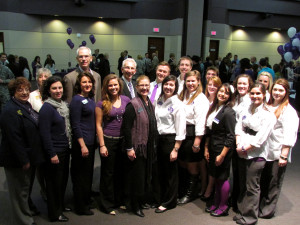 SGA held the event to give Tarleton students a chance to attend and meet people from the Stephenville Chamber and some local businesses who support Tarleton. The mixer also offered food, drawings for students, business owners, chamber members, and speeches from Stephenville Mayor Kenny Weldon and President Dr. Dottavio of Tarleton State.

Tayler Atkins, the Co-Vice President of Public Relations and External Affairs and student of Tarleton State University, said her goal was to ask the chamber what Tarleton could do to help “get the Tarleton Community and the Stephenville community together.”

“They also wanted to get more involved on both sides,” Atkins said, “So we thought the first step to that would be making Student Government Association a member of the Chamber of Commerce.”

Atkins says that the SGA is the first Tarleton organization to join the chamber. She added that the ChamberMIX was the largest one the Stephenville Chamber has had.

“The main goal of this is to bring both communities together so we can collaborate more with each other, take a larger interest of each other and benefit from each other,” Atkins said.

“There is nothing but gain here, nothing but benefits from building a relationship between us and them.”