April Fools brought more to the campus than pranks and jokes. It also saw an event within Student Government Politics: the SGA Presidential Debate. At roughly 6:45 p.m. in Room 107 of the Nursing Building, Student Government Association members, SGA Presidential Candidates, and those with a passion for student politics all met to hear those running present their campaigns and opinions on several campus matters. 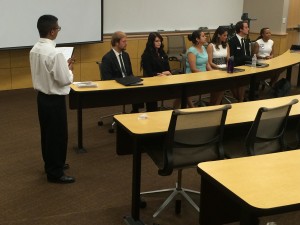 The first question asked was about the most important part of each candidates’ campaigns. The answers given were all extremely different. Jamee Bell and Drew Watson’s campaign will focus on community involvement and protection. Delaney Olsen with running mate Jordan Reeder presented her passion for getting Tarleton students excited about all the upcoming changes. Lura Rylant pushed the importance of communication with partner Ana Gutierrez-Perez.

Questions were pre-prepared by the SGA, as well as pulled from the audience and Twitter using the hashtag #VoteTSU. The debate covered goals, admin relationships, and current issues. One question, pulled from Twitter, asked if each campaign felt that the Tarleton 2020 plan was correct. Watson was adamant in letting the crowd know that it was incorrect. Olsen said that nothing is set in stone, and the 2020 Plan gave good opportunities for the university moving forward. Rylant said that because Tarleton is landlocked, the plan couldn’t be completely accurate.

One of the most notable questions asked was each campaign’s stance on Concealed Handgun Licenses on campus (CHL). Bell said that she was in favor, for Texans to protect their rights. Olsen was also in favor, saying that it was what many students wanted and it could help the university. Ana GP felt that it was symbolic about the majority of students saying, “Majority always rules.”

This debate showed the goals and aspirations for each campaign, highlighting their differences but also their passion for Tarleton’s Student Government Association. It also gave insight into each of their stances and feelings about current issues. It was a definite help to any who are on the fence between candidates. Elections will be on TexanSync, April 6-8.