Shea Abshier and the Nighthowlers

Shea Abshier and the Nighthowlers spoke to Texan News in late January to share how their journey has been so far as an up and coming band who are local to Stephenville.

Lead guitarist Paul Oliger playing his guitar at a show in Lubbock. Photo courtesy of Shea Abshier and the Nighthowlers

Abshier, lead singer, and Paul Oliger, lead guitarist, went into an in-depth look at their experiences as a band, music influences and dreams.

Originally from Stephenville, Abshier has been playing for roughly 10 years. Oliger is from Plano and has been playing in the band for three years. The band first started to get some publicity in March 2016.

Recently the band played at Twisted J, a local bar and music venue.

“That was awesome,” Abshier said. “We opened for Wade Bowen a couple months ago, and Bostocks was a solid gig – they are good about local bands coming out to play,” Oliger said.

When it comes to booking shows, Abshier said, “booking is segwaying into an easier process now that the record is out, but it’s still a grind.”

Abshier mostly focuses on the band, but Oliger has been a part of Sigma Chi, a fraternity at Tarleton State University, for two years and is the pledge educator, meaning he teaches all the new members everything about Sigma Chi. Oliger has also been in the Army, specifically the Texas Army National Guard, for 4-and-a-half years.

“My deployment is soon and it’s something I’ve always wanted to do, but the opportunity never presented itself until now,” Oliger said. “With the record out, and big shows booked and fans, it’s bad timing, but I’m happy to do it,” Oliger continued.

“I’m too chicken to go do it. I’ve supported it (the service) the whole time. He’s got a job when he comes back. I couldn’t be prouder of him, honestly. It’s something that, it sucks right now, but music is just a small part of life. We’ve got bigger things going on in the world and so that needs to be taken care of first. I’m glad we’ve got somebody on our squad that’s willing to go do that,” Abshier said.

While Oliger is deployed, the band does has a plan.

“We’ve got a couple guys that have been working with us,” Abshier said. “We’ve got a little run through Oklahoma and Missouri with (the band) Shane Smith and the Saints and that will be (new guitarist, Ben Richard’s) first trip with us. It’s cool because we have Paul here. It’s not like a sour ending between us two. We can shape and transition a lot smoother than most people could have.” 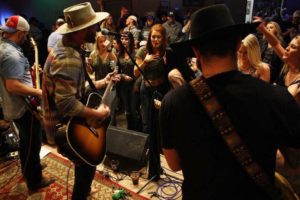 When it comes to influences, “I originally picked up a guitar because of Slash from Guns and Roses,” Oliger said.

“I went through a phase where I wanted to sound like Van Halen for a little while. Currently, my biggest influence is John Mayer. He is by far, in my opinion, the best guitarist in the 21st century. So, I pick up a lot of my stuff from him. And then obviously Stevie Ray Vaughan and guys like that,” he continued.

“Mine are Tom Petty, Matchbox Twenty, Alanis Morisette…,” Abshier said. “I’m more into the lyrical part of songs. Alanis Morisette and Rob Thomas are my favorite writers and lyricists,” he continued.

Shea Abshier and the Nighthowlers call themselves Americana.

“That’s the safest thing,” Abshier said. “The album is called “Potluck,” because there’s a lot of different stuff. We brought everything to the table. Each song is unique. We didn’t know what to call it.”

Some of the band’s dream venues are Billy Bob’s and the Larry Joe Taylor festival.

“We’re going to try to slide into LJT,” Abshier said.

Abshier’s dreams for the band are “taking care of my guys comfortably and to live off music,” he said. “I want to “make it,” whatever that looks like – it’s different for everyone.”

“Everyone wants to reach the point where you walk into a bar and hear your song playing,” Oliger said. “We’ve already hit the point where people are starting to realize who we are – that’s one of the coolest feelings. Being able to live off music is the primary goal,” he continued.

Both Abshier and Oliger agreed that they want to be able to “eat good.” 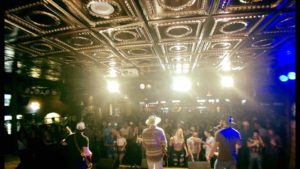 So far, the band’s favorite towns to play in have been College Station and Stephenville.

“College Station had one of the biggest crowds we’ve ever played for with Read Southall, (a country and rock band based out of Stillwater, Oklahoma),” Oliger said. “That was surreal just watching a dream come true. In Stephenville, we headlined, and we were 26 people away from selling (the show) out. Everyone was there to watch us play and not someone else. I still can’t get over that.”

“We usually have 26 people in the crowd and we had 26 people from selling out – that was cool,” Abshier said.

Their album titled “Potluck” is available for download on iTunes, Spotify, Amazon and Google Play. Listeners can also pick up the album at shows or on their website at www.sheaabshierandthenighthowlers.com.