By Jeffrey Collins and Phillip Lucas—

Driggers, working as a chaplain for a group that helps police departments, had to pray and talk to his wife before taking the job. Summey’s top task was to repair relationships with the black community that had been strained for years by North Charleston’s aggressive crackdown on crime through traffic stops that African-Americans viewed as harassment. 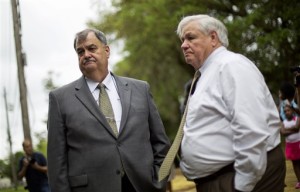 CORRECTS RALLY TO VIGIL – North Charleston Police Chief Eddie Driggers, left, and Mayor Keith Summey wait for a vigil to begin at a makeshift memorial where Walter Scott was fatally shot by a white police officer after he fled a traffic stop, Sunday, April 12, 2015, in North Charleston, S.C. The officer, Michael Thomas Slager, has been fired and charged with murder.
(AP Photo/David Goldman)

After one of his white officers was charged with murder in the shooting of an unarmed black man running from a traffic stop, Driggers is trying to mend an even bigger rift, all under the glare of a spotlight.

“I have been praying for peace,” Driggers said Wednesday at a news conference frequently interrupted by angry protesters. “Peace for the family, peace for the community. And I will continue to stand on that as I strive to protect and serve the people I took an oath to help.”

Driggers hasn’t talked much publicly since. The mayor said after a church service Sunday that Driggers has worked to improve police-community relations in the past two years and that recruiting minority officers is among the department’s top priorities.

“My faith in him has not wavered in any way shape or form,” Summey said. “It makes me feel good that my chief has a heart and compassion, and can show that compassion.”

Driggers first put on a badge for the North Charleston Police Department in 1975. While he stepped away from law enforcement for five years to follow his faith, he is not some small-town inexperienced lawman, said Charleston County Sheriff Al Cannon, who hired Driggers 40 years ago when Cannon was chief in North Charleston.

Driggers has been a captain at the sheriff’s office, and he was a detective and SWAT specialist.

Some in the black community in North Charleston weren’t happy with Driggers’ hiring because Summey didn’t appear to consult anyone before tapping Driggers to replace Jon Zumalt, whose used computers to find areas where crime was the worst and then send his officers there for an enforcement blitz. Crime dropped substantially. Murders decreased 50 percent, robberies fell 66 percent and burglaries were down 29 percent from 2007 to 2012, the last year state figures were available.

Black residents said Zumalt’s tactics were harassment, made worse because less than 20 percent of North Charleston’s 325 officers are black in a place where African-Americans make up half the city’s roughly 100,000 people.

Driggers has made efforts to reach out to minorities with cookouts and community discussions. The complaints from African-Americans are more about the department as a whole. There have been few calls for Driggers to step down.

On Sunday, the Rev. Al Sharpton thanked the police chief and the mayor for responding so quickly after seeing video of the shooting. Driggers and Summey were in the audience.

They had previously visited Walter Scott’s family after then-officer Michael Slager was charged with murder, and they gave Scott’s family a full police escort at his funeral.

He said at a news conference when the murder charge was announced that he only watched the video of the shooting once and he was so stunned, he didn’t watch it carefully. When a reporter asked him what he saw, he took nearly 15 seconds to compose himself. His voice still cracked a little as he started to speak.

“I think all these police officers on this force, men and women, are like my children. You tell me how a father would react to seeing his child do something,” Driggers said. “I’ll let you answer that yourself.”