Update: The protester’s name is Samuel Campos. He was arrested for a Class A Misdemeanor and is already out on bond.

Thursday’s Texas A&M Board of Regents meeting was interrupted by a PETA protester running through the Thompson Student Center Ballroom shouting “Shut the dog labs down now.”

The protester was carrying a poster that read, “Michael Young (president of Texas A&M University), stop cruel muscular dystrophy experiments on dogs.” Police Chief Matt Welch pursued the shouting protester out of the ballroom and arrested him in the hallway outside. 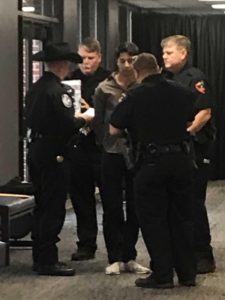 The PETA protester who ran through the ballroom shouting was immediately arrested. Photo by Quanecia Fraser, Texan News.

PETA – People for the Ethical Treatment of Animals – was at the meeting to protest TAMU’s experimentation on dogs.

According to peta.org, PETA is the largest animal rights organization in the world, with more than 6.5 million members and supporters. PETA focuses its attention on the four areas in which the largest numbers of animals suffer most intensely for the longest periods of time: in the food industry, in the clothing trade, in laboratories and in the entertainment industry.

Welch said the protester who ran through the ballroom shouting has been arrested and is currently being held in the Erath County jail.

He explained that the protester told him, “All we’re going to do is hold our signs up.” 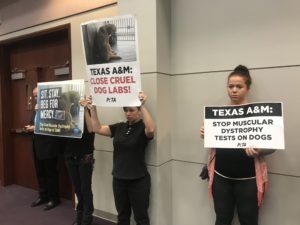 Beth Cohea, right, says that she supports what the arrested protester did. Photo by Quanecia Fraser, Texan News.

“The person I spoke to, I asked her to tell all her friends (not to disrupt the meeting). And, whether she communicated that or not, I don’t know.”

According to various posts online, the protesters planned to be present at the meeting that took place at Tarleton. Welch told Texan News that the protesters usually go to the Board of Regents meetings on other campuses to protest TAMU’s treatment of animals.

Right after the incident, Texan News spoke to two silent protesters who both say that they support what the protester who was arrested did.

One of the protesters, Beth Cohea said, “For 35 years, Texas A&M University has been testing on golden retrievers and other dogs, but over the years, there has not been any advancement or cure.”

She added, “So we are calling out Texas A&M University to shut the dog labs down and transition the dogs to credible homes or rehab centers that they’ll need.”

Cohea says that despite PETA’s requests to shut the dog labs down, Texas A&M University has been unwilling to do so.

“The chairman or a majority of the board may prescribe sanctions against any person exceeding established time limits or speaking on a topic other than the agenda item.”