Former Stephenville High School quarterback Jarrett Stidham recently made the big move to Waco to continue his football career as a Baylor Bear. Graduating high school in December, Stidham began his first semester as a college student athlete this spring.

“Going from my senior season straight into one of the top teams in the country’s off season was definitely a big change, a big jump,” he admitted. “It was definitely hard at first, but I got the hang of it pretty quick I think. It was a good transition.” 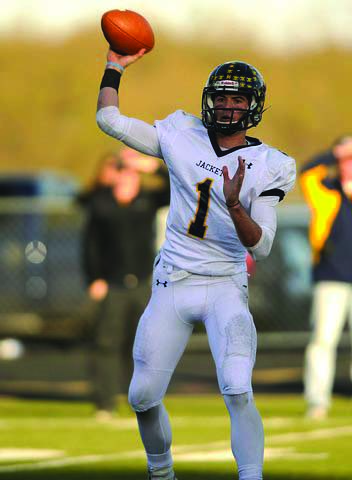 Stidham concluded his senior football season as a Stephenville Yellow Jacket this past December with numerous honors. Stidham had offers from every elite college football program in the nation and had even committed to Texas Tech University in March 2014. Late December he pulled his commitment, though, and instead put his football career into the hands of the Baylor Bears.

“There were certain important things in my life that I wanted to be able to do, not only in my collegiate career but hopefully my professional career too, and I just thought Baylor was the right fit for me and what I wanted to do and everything that I wanted to accomplish,” Stidham said in an interview with Texan News.

“Tech is a great school, great people, great coaches,” he added. “I love Lubbock. It was a good fit, but I just felt like for what I really wanted to do later on in life and stuff, Baylor was going to give me the best possible chance to make all that happen.”

Just a few months into his first semester at Baylor, Stidham took part in his first collegiate spring game on his new home turf. When asked what the experience was like, Stidham didn’t hide his excitement.

“It was really fun!” he exclaimed. “Playing over at McLane Stadium, that was pretty sweet. I’ve been under the lights one time other than that, so it was cool just to get in there and play on the actual field that we’ll play on. Just going through a college spring game is just another goal I can check off my list.”

The Bears are coming off of a successful 2014-2015 season, but with Head Coach Art Briles at the reins, that is no surprise. Briles is known for building Baylor’s winning football program and developing top-notch quarterbacks, most recently Robert Griffin III and Bryce Petty.

Stidham revealed what it’s been like having the opportunity to work with him.

“So far it’s been awesome,” he said. “He sits in our meetings and stuff with KB (Kendal Briles, Baylor offensive coordinator/quarterbacks) as well. Him and KB, they go after what they want done. Everything he tells us to do, it all flows together. It all makes sense. Everything he tells us, it’s for a reason and it has a purpose, so that’s one thing I like about him and KB both. They really try to push us to our max every day.”

Stidham has clearly enjoyed his transition, but he did admit it wasn’t easy leaving all of his friends and family in the middle of his senior year. He said that has been the hardest part of the process.

“I mean, I’m definitely glad I did it,” Stidham explained. “There are some things I think that definitely are a lot different for people like me, how we graduate early and then come in January. Most people get kind of a whole summer to prepare for college, whereas I had basically like two weeks. I didn’t really know what to expect or how to handle it and stuff.

“Once I got here, college is just different than high school,” he continued. “Obviously I was missing all my friends and family and stuff, so that was an adjustment. I was basically coming down here all alone. You know, that’s kind of rough at first. But once I started kind of acclimating myself, getting to know people and all that, it’s gotten a lot better.”

The small town quarterback has accomplished so much already, but Stidham made it clear that he’s just beginning.

“Being here at Baylor, obviously I just want to get a good degree and truly have a path in life,” he said. “And the football side of things, there’s tons of things I want to accomplish. As a team, I want to keep this Big 12 Championship run going as long as I’m here, obviously add some National Championships to that as well. I want to be the second guy to ever win the Heisman here. There’s endless things. I mean there’s just so much to look forward to at such a great university with great people around me.”

Stidham concluded with a grin, “I think it’s just going to be a really good three to four years.”